So you know how it's better to be in late position and act after your opponents, and how being one of the first to act can get you into some pretty sticky situations.

Now it's time to take your knowledge of position at the poker table up an extra notch and introduce you to something pretty interesting that may well save you some money.

What is relative position?

Relative position is your position at the table relative to the position of the initial preflop raiser ( bear with me, the description is less confusing that it actually sounds). 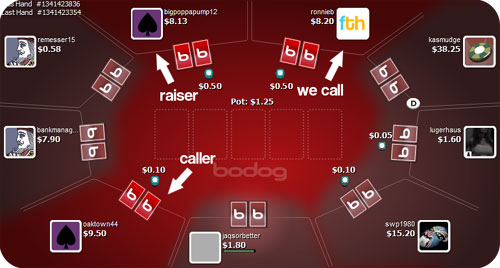 In this example, we are to the immediate left of the raiser, which would normally be good seeing as we are acting last on each round. However, the presence of the first caller coming along for the ride means that we are going to be in a tricky spot on the flop due to our position relative to this raiser.

The problem is that the initial raiser is likely to make a continuation bet on the flop, which will mean that the betting round will be effectively 're-opened' as the first caller will have another opportunity to act. Therefore, because the initial raiser is going to make a continuation bet, it pretty much removes the benefit of our late position because we will no longer be last to act in the hand.

Because the first caller knows that a continuation bet is likely, you will often see the first caller checking to the raiser to allow them to make this continuation bet, even if they have a very strong hand themselves. This results in us losing the advantage of being able to act last because the betting round will re-open, and we will be sandwiched between two players who have given no clear indication of how strong they are, which is very dangerous for us.

To reiterate, in this relative position example of being to the immediate left of the raiser, two bad things have happened:

How can you use relative position to your advantage?

The best thing you can do with relative position is to be aware of its implications, and be careful when you find yourself calling a raiser when there are other people acting after you in early position. If you can familiarize yourself with situations where you could become trapped in such a relative-position-style hand, you will be able to save yourself money by throwing away any mediocre hands that could get you into trouble. 'Losing' your position when you thought you were going to be acting last can get pretty tedious, so try and spot it before it's too late.

It may sound a little confusing, but if you run over the example a few times you will start to understand how being to the right of a player that continuation bets will

eventually leave you as the last player to act on the flop.

As with most theory and strategy in poker, the more you play, the more familiar you become with it. The key point of this article is to highlight how although being in late position is going to be beneficial the majority of the time, you should keep your eyes open for the situations where this advantage will be taken away from you due to your position relative to the preflop raiser.

Your awareness of relative position will slowly build up over time. Don't expect to be playing with it at the forefront of your mind from this moment on - it will come with time.

There is no need to tear your game apart to try and get the better of these particular situations, just simply keep an eye open for them and approach them accordingly. Knowledge of this principle isn't necessarily going to make the difference between winning and losing, but it will add that extra money to your bankroll at the end of the day.

Go back to the sublime Texas Hold'em guide.