Your position at the poker table will often be more important than the cards that you are dealt... seriously. You will find that the outcome of every hand will be largely dependent on the position of each of the players at the table.

So, I think its pretty important that we learn about the importance of position before the next time we play a hand. You will never look at a hand in the same way again...

What is table position in Texas Hold'em?

If you take a close look at an online poker table, you will notice that the dealer button moves to the left after every hand. This allows for each player to put an equal amount of blinds into the pot as the game is played through each rotation of the dealer button. In addition to this, the dealer button changes the order of which players are going to act on each betting round.

If you are to the left of the button (i.e. in the blinds or just to the left of those), you will be one of the first players to act on the flop, turn and river, and there will be a number of players acting after you. Conversely, if you are on the button or just to the right of it, you will be one of the last players to act, as the majority of the other players at the table will have to make their plays before you. 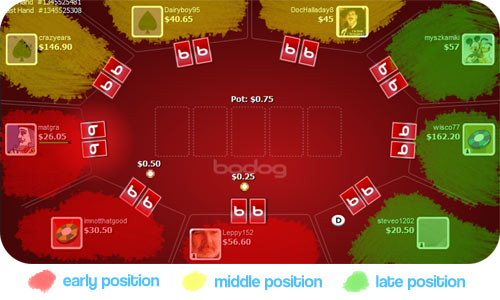 Why is table position in Texas Hold'em important?

Table position is important because it is going to be incredibly useful to be able to act after our opponents. If we are the last to act on a hand, we can see whether our opponents have checked or bet before us, whereas we would not have this sort of information on our opponents if we were acting before them. The actions of our opponents is going to help us a lot, as it gives us a strong indication of the strength of their hand.

Lets say we are up against one opponent on the flop and we have not managed to improve our hand. If our opponent checks to us, we stand a good chance of being able to run a successful bluff, because we can infer from their check that they are weak by not wanting to bet out. However, if we were the first to act we would have no idea of whether they are strong or weak, because we have not had the opportunity to see what action they are going to take.

You really want to try and avoid playing hands from early position, that is unless your hand really is too good to fold.

That was a pretty basic example, but the theory can be applied to almost every situation in poker. So if you can see why position is important from this example alone, you have already come a long way in developing your game.

Playing hands depending on your position.

As a general rule:

You need a stronger hand to play out of position than you do when you are playing in position.

So basically, if you are going to be one of the first to act on each betting round, you will want to stick to playing premium hands like:

However, if you have good table position and you are going to be one of the last to act on each round, you can comfortably open up your starting hand range to include the following hands (along with the hands listed above, and assuming that there hasn't been too much action before you):

This is all because of the fact that being out of position is going to be quite a big problem, and it is going to make the hand a lot more difficult to play. Therefore you will want to give yourself a much better opportunity to win the hand by only the playing better cards, and avoiding the ones that are likely to get you into trouble.

You can find out more about choosing the best starting hands in the starting hand strategy article, which should be your next stop on the strategy tour anyway.

The big and small blind seats are horrible.

Don't be fooled by the blinds! You may be one of the last to act before the flop, but for every betting round after that, you will either always be first or second to act. So make sure that you stick to playing the best cards in these seats and throw away any marginal hands. You will want to look throw away the vast majority of your hands in these seats as they will lose you money more often than not.

The button is awesome.

The button is the best seat in the hand. If you are on the button, you can guarantee that you will be the last to act on every betting round after the flop. This doesn't mean that you should play anything and everything from the button, but you can really open up your starting hand requirements to get in on the action from such a great seat.

You should be playing a lot more hands from the button than you should from early position.

Middle position is in the middle between the good and bad seats, funnily enough. When you are in middle position you will want to keep an eye on whether players have limped in or raised before you, because you could either end up being one of the first or last to act on each round depending on which players decide to see the flop. The less players acting after you, the better your position becomes.

Every time you play a hand in Texas Hold'em (or any other poker variant for that matter), you should always take into consideration your position relative to the dealer button. You may well be surprised at how much of an influence your position at the table can have on the outcome of a hand, so don't just look at your cards the next time you decide whether or not to play your hand.

If you are familiar with the principles behind table position, you may want to take it up another level by having a look at the article on relative position.

Go back to the sublime Texas Hold'em guide.