Why I'm Playing At Party Poker So Much. 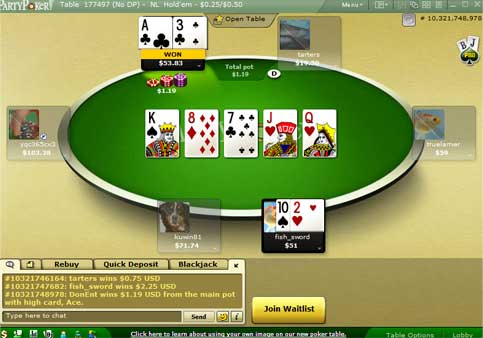 I may regret letting you in on this one, but whatever, I guess I'm too helpful/cool/handsome for my own good.

Basically, I've been playing exclusively at Party Poker for the last few months. Why? Because I'm winning a hell of a lot more money than I have been at any other poker room. I've definitely been playing elsewhere for far too long.

Why am I winning so much more money?

Because the players are absolutely terrible. Seriously, it's incredible.

Just look at this graph…

Why are the players so bad?

Honestly, I don't really know. I'm just making the most of it while I can.

Here are 3 genius ideas I came up with though:

Those are my awesome theories. But whatever the reasons, Party has become home to a crazy number of bad players, and a haven for the few that have found out about it (like me).

Should you make the move?

After an arduous day of procrastination, I made a quick $50 deposit just to test Party out. I heard the games were juicy and I hadn't played there for a while. I wasn't having a great few days at my regular room either, so I thought I'd give it a go. Literally after 2 hours of playing $25NL (yes, I know, horrible BR management), my account looked like this:

Now sure, this is hardly the most impressive win over 2 hours. Far from it. The crazy thing though was that I wasn't just getting lucky and winning coinflips. I won the best part of 5 buy-ins in this short amount of time by just running in to bad players that couldn't fold. I was value betting the hell out of them and making a killing.

Shortly after this session I switched most of my bankroll over to Party, and I haven't looked back since.

If you've already got an account at Party, blow the dust off that old desktop icon and fire up some tables. If not, create your account and check the place out for yourself. Hopefully your first session is as fun as mine.

Can you afford to miss out on this?

The games at Party Poker aren't going to be soft forever. At this time of writing though (2010), let's just say I've been adding more money than ever to my weekend beer fund.

It doesn't bother me if you move to Party Poker or not -- in fact I'd prefer it if you didn't.

It's just that every day you spend playing at a different online poker room, is another day you've lost your chance to take advantage of some fish deciding to call all-in with K8o when you've got KK. It's a great feeling.

When you're in the middle of your session, you'll want to make sure you're taking advantage of the colour coding feature.

I've been tagging all the especially bad players with green notes, so I'm able to win even more money again by making sure I play as many pots as possible with the players I've marked. It's super handy.

I'll leave it at that.

I could go on and on showing you just how good the games currently are at Party Poker, but I won't for two reasons:

Feel free to join me, but if not, no worries. It's not going be to me leaving any money on the table in my next session.