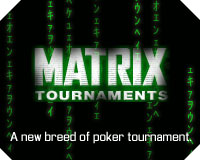 The Matrix tournaments at Full Tilt Poker are a new and unique creation that aim to test the skill and ability of the more experienced players at the Full Tilt Tables.

What are the Full Tilt Matrix tournaments?

So if you think that you're pretty good at mutlitabling and can make quick decisions when the action reaches you, the Full Tilt Matrix tournaments could well prove to be a nice little earner for you.

How does the prize money work?

the best overall players in the tournament. So that's...

So even if you do not win any of the tournaments, you could still win money for knocking players out and finishing highly in each of the individual Sit and Go tournaments.

The individual table prize money is easy enough to understand, as the winner gets the top prize for that table, the runner up gets the second prize and the player in third gets the third prize amount. However, how do you get your hands on the prizes for overall performance?

Well, their is a point system that runs across each of the tournaments as you play. It works like this:

So if you can finish highly on each table and knock out a fair amount of your opponents, you are on your way to winning the overall performance top prize. So don't sit back and wait for other players to knock each other out, get out there and try and rack up some points by taking players out of the game.

Technically speaking, there should be no difference in strategy in a Matrix tournament than there would be in a single Sit and Go tournament. So just try and play your standard Sit and Go game as best as you can. However, here are a few tips to help you along...

Check out the articles on multi-tabling and basic SNG strategy if you are after a few extra tips.

on the "Matrix" tab.

You will then see a list of all of the available tournaments and buy-ins. The stakes range from $1+25c right up to $2,100+$90, so there is a nice selection for all players.