SNG Player? Check out my rankings of the best sit and go poker sites for 2022. 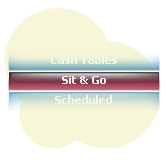 A Sit and Go (SNG) is a small poker tournament, typically just a single table, with no officially scheduled start time – when enough players join the tournament will begin. SNG tournaments have become extremely popular online and are available at a wide range of buy-in levels from just a few dollars into the 1000’s.

This article will cover the basics of SNG strategy by going through the various stages of a one-table tournament and showing how strategy changes.

We start by giving an overview of the differences between SNG strategy and that for cash games. Next the 4 main stages of a SNG tournament are discussed separately, covering early game, mid-game, bubble play and finally in the money play. We wrap up by looking at some common opponent errors.

There are 2 key differences between SNG and cash game strategy.

This means that instead of distinct hands, SNG play deals with ranges of hands – the optimal play is to take (often small) mathematical edges against the range of hands opponents will call or raise with. For players used to cash games, SNGs can seem like an unskilled version of poker – however those players who are adept at working with both ranges and prize pool equity have a significant and profitable edge.

In a cash game the chips in your stack are worth exactly the dollar value assigned to them. Through the various stages of a SNG tournament the chips you hold will actually change value. This is due to the fact that the player who eventually wins all the chips will not win all of the prize money.

Typically SNG tournaments pay 50% for 1st, 30% for 2nd and 20% for 3rd. If 10 players start a $10 SNG with 1,000 chips then each chip is worth 1c at the start of the game. At the end the winner has all 10,000 chips – however the prize pool distribution gives him $50, meaning each chip is worth 0.5c. Awareness of the changing value of chips and mathematics of prize pool equity are most important at the bubble, when just 1 player must bust before the money.

The different stages of SNG tournaments.

The early stages of SNG tournaments are characterized by solid and tight poker. At this stage the blinds will be small and stacks deep. The reason that tight play is optimal in the early stages is due to a mid-game and bubble play dynamic known as ‘fold equity’. Since the ability to get opponents to fold in the later stages when the blinds are relatively high is so important to the game, tight play early is the norm to ensure that you keep enough chips for the middle stages.

As the blinds get higher and number of remaining opponents begins to drop SNG play becomes more aggressive. The middle stages are characterized by stealing blinds, raises and re-raises. In a cash game defending your blind is not critical to success (though necessary sometimes), in a SNG tournament blind defence is critical – as is the ability to use the threat of elimination to steal chips from your opponents.

The bubble is the most strategic part of any SNG tournament. With just one player to go before the paying places these tournaments often become a battle of nerves as one player pushes all in and the others fold. The key strategy consideration now is that you need a much better hand to call an all-in bet than you need to move all-in yourself (see the gap concept). The reason is the diminishing value of chips.

Once the bubble has burst and the remaining 3 players are in the money paying places strategy changes once again. Since the blinds are now huge in relation to the stack sizes all-in bets are again the norm. However without the risk of elimination players both raise and call raises with much weaker holdings.

Adjusting to this is dependant on specific opponents. However newer SNG players need to be aware that any pair, most aces and any 2 ‘face cards’ become very strong at this stage. See the article on short stack strategy for more information on this topic.

Common errors to watch out for in SNG tournaments include overplaying easily dominated hands early – for example ace-X (ace rag) hands where the X is jack or lower.

Failing to defend your blinds during the tournament, and calling bets at the bubble without very strong holdings are also errors. The ability to accurately assess the range of hands which individuals will raise and call raises with is a key skill in SNG tournaments and worth spending the time to learn.

For more advanced SNG tournament strategy, try the what is ICM? and how to use ICM articles.

In summary, SNG strategy is all about 3 interacting factors. Your ability to adapt to the changing game conditions (changing gears), an understanding of how prize pool equity changes the value of chips and the ability to accurately assess the calling and raising ranges of your opponents. These factors are at their most important during bubble play – this is where the majority of a good SNG player profit is derived from.