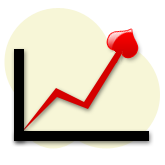 After the UIGEA gambling legislation passed in 2006, there are now far fewer numbers of online poker players playing in the US.

The US online players were always in the majority when compared to the number of players outside of the US, but now the ratio has significantly changed.

Because so many players were from the US, the majority of big name poker rooms designed their software so that bets would be made in USD($). This means that if you live outside of the US and decided to play at these big name sites that only offer play in USD, the money you deposit will be converted from your home currency into USD.

So this is where the exchange rates come into play...

How your money gets exchanged into Dollars.

Every time money is converted from one currency to another, it has to pass through an exchange rate so that you get an equal value of the currency you are converting to. For example, if the exchange rate for British Pounds into American Dollars is 0.5, you will need £0.5 for $1 (which works out as $2 for every £1).

This ensures that you get the correct amount for all of your converted currency, as it will be of the same monetary value. Furthermore, when you wish to convert back into your original currency, an inverse exchange rate will be used so that you should have the money converted back across a similar rate.

However, there is one factor that has not been included so far, which is the fact that exchange rates are constantly changing from day to day. Exchange rates are affected by the economical health of a country, which is influenced by factors such as employment and number of exports.

How are exchange rates worked out?

The stronger the economical health of a country, the greater the value of its currency will become and vice versa. It is for these reasons that people can make a living from trading money from one currency to another, if they predict that one currency will increase in value over a certain period of time.

How do exchange rates affect the non-US poker players?

Because players outside of the US do not work with USD, all of their money that they use for online poker has to pass through these exchange rates so that it can be converted into USD to be used to play online poker. Now if there is a player that deposits money into a room and does not withdraw it for a substantial period of time, it gives rise to the possibility that the exchange rate will have changed significantly.

Therefore the money in the online room could now be worth more or less depending on how the exchange rate has changed. Therefore this should influence when money should be withdrawn from online rooms if we intend to maximize our profits.

Normally, the exchange rate will change so slightly that it will have an insignificant effect when depositing or withdrawing money. Furthermore, the smaller the amount of money that is taken out, the less effect the exchange rate will have in relation to the overall bankrolls. But if large sums of money are being withdrawn over extended periods of time, it is in a poker player’s interest to keep an eye on the fluctuating exchange rates at times of deposit and withdrawal.

Exchange rates diagram between 0ct '06 and Feb '07. (Quite old, but does the trick anyway).

An example can be drawn from the graph of the GBP/USD exchange rate between Oct '06 and Feb '07 taken from x-rates (see diagram above).

So lets say that a British player deposits £1000 into an online poker room that converts their money into USD. If this player deposited on Oct 10th 06 where the rate was highest, that person would have been given a bankroll of $1854.80. Then if that player broke even for 2 months and withdrew the $1854.80 on Jan 23rd 07 where the exchange rate was lowest, they would receive £934.55 back into their home bank account.

As you can see, that particular player has lost just over £65 ($130) through the fluctuation in exchange rates (assuming they also went on to avoid the "cash out curse" too, of course). But if he/she had waited until the exchange rate had increased in their favor, they could have saved themselves a little more money.

It would be wrong to suggest that it is in an online poker player’s main interest to study exchange rates in any great depth, as the amount of money that you will be losing or gaining will not be significantly affecting the size of your bankroll.

However, it may be beneficial in keeping an eye on the exchange rates when determining whether or not it is a good time to make a large withdrawal of money if it is not vitally important, because there is a good possibility that you will be able to save yourself a decent sum of money by waiting for a time with good exchange rates.

I use the x-rates site to keep an eye on the exchange rates between different currencies through their very handy graphs and calculators.