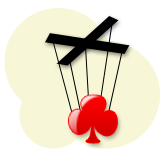 Firstly I will clarify what most people mean when they say that online poker is rigged or fixed. This idea is suggested because a lot of people believe that the cards are dealt in set patterns so that certain hands will be specifically chosen by the site, resulting in numerous bad beats for players.

Therefore due to this frequency of bad beats, a player may claim that the site is rigged and that no hands and cards are dealt out at random.

So anyway, is online poker is rigged?

Every site uses a RNG (Random Number Generator) to randomly choose cards from a 52 card deck on every singly hand. Rigged online poker is just another one of the many online poker myths.

Theories for online poker being rigged.

I could end the article at that, but now you will be asking the question of why I am so sure that it isn’t rigged, so I will continue and hopefully explain why it is not rigged and dispel some common rumors about Internet poker at the same time.

Many people have different suggestions as to why Internet poker is rigged, so I will address the most popular theories in the next few paragraphs and give the reasoning to why they are incorrect.

Explanation: I will admit that it is true that you will see far more bad beats online than you will during live play, but this is not because it is rigged. There are two reasons why you see such a high frequency of beats online:

To elaborate on point #2, players are happier to call down large bets and raises on unlikely draws, as they do not have to worry about being berated by other players at the table (except for a few words in a chat box). If a player is playing at a live table, they are more likely to avoid calling with terrible odds for a draw because they would not like to be criticized because of their bad play.

Because online players are calling with worse hands and worse odds, you are likely to suffer more bad beats.

Theory: The online rooms fix the cards so that the bad players will get luckier to stop them from losing too much money and leaving the room. The rooms want to keep as many players as possible so that they generate more rake, so by fixing the cards to make it ‘fairer’ for the bad players, they will able to make more money for themselves.

Explanation: The chances of a room fixing cards to help the bad players save money are almost non-existent. Only when you start to think about the side effects of such a system can you appreciate the absurdity of such a theory.

If a room is helping a bad player from losing money, at the same time the room will be taking this money from the good players to compensate. Therefore there would be no such thing as the online pros that make a living from playing online poker, because they will find it too difficult to win money due to a ‘fair’ system.

In addition, the site would have to scrap the use of its RNG and design a system that is able to detect a losing player and be able to deliver ‘good hands’ to those players. Not only would this be incredibly difficult for the sites to create, but it would also be illegal. If a site were found to be utilizing such a system to help make them more money, they would incur a staggering amount of fines and be heavily prosecuted. The poker rooms know this and so it would be dangerously unwise for them to even consider using such a system.

Theory: Poker rooms have pre-set ‘action hands’ that give two or more players very strong hands. This helps to create larger pots, which in turn generates more rake for the room.

Explanation: As already mentioned above, the poker rooms would have to knowingly break the law to achieve this system. With so many people involved working with the rooms, there is a high chance that information of such a system would slip out into the public eye and scar the integrity of the room.

Furthermore, the room would be forced to close and they would face large fines and legal action due to their exploits. If a room were using a system like that, you would know about it by now. As far as the poker rooms are concerned the juice just wouldn’t be worth the squeeze, and they would rather invest their time in making the room more attractive to new and old players.

These are the most popular arguments for why online poker may be rigged. As you can see the explanations make it incredibly unlikely that the poker rooms will ever rig poker for the online player. If you browse through a poker room’s homepage you should be able to find information on how each hand is randomly generated. If this is not available on the website then you should be able to request information about it by emailing the poker room.

If you really wish, you can test the RNG of the rooms by tracking the results of your play using tracking software and comparing the statistics you obtain against the mathematical likelihood of each situation over a large number of hands. However, you must obtain a large amount of data if you intend on doing this to make sure the results are fair and accurate. If you are still unsure about the room you are playing at, simply move onto a different room.