For a guide to getting the most from hand when you flop either a set or trips, check out this Trips and Sets strategy video by SplitSuit.

If you've been playing poker for long enough, you will have heard of a “full house” being referred to as a “boat” from time to time. It's just another one of those slang terms in poker.

Similarly, you will probably have heard “3-of-a-kind” being referred to as a “set” or “trips”.

However, what you might not know is that “set” and “trips” aren't just nicknames; they actually describe the 2 different ways you can make 3-of-a-kind in Texas Hold'em.

What's the difference between trips and sets? 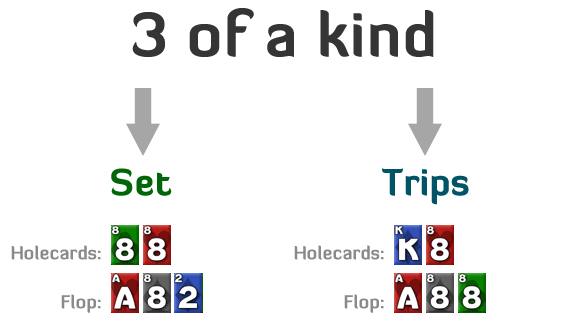 Sets and trips are the two separate ways of making three of a kind in Texas Hold'em.

So basically, a set is when you make 3-of-a-kind when you're holding a pocket pair.

Odds of hitting trips and sets on the flop.

The gap between the odds is large because it's obviously much easier to hit 1 card out of 2 than 2 cards out of 3 over three trials (the flop).

There is a saying in Texas Hold'em that “sets win money and trips lose money”. This isn't a massively popular theorem, nor can I find any articles mentioning it, but it does get thrown about on the odd occasion.

Just like any piece of poker strategy advice that's confined to one line, it's not something that you're going to want to set your watch to. However, this sweeping statement does have enough merit to it to make it worth talking about.

If you like short strategy tidbits, check out these poker theorems.

Here's a quick explanation of why sets are awesome and why trips are its disappointment of a brother.

Many inexperienced players (and even some of the better ones) forget about the possibility of sets when they hit a decent hand. For example, if your opponent has A

on a flop of K

and you keep calling/raising their bets, the majority of the time they're going to assume that you have a weaker king and be happy to put more money in the pot.

In fairness, even good players will struggle to avoid losing money in a hand like that (in fact, you would be have played too passively if you didn't lose at least 20% of your stack). However, the point is that sets are not always accounted for like pairs, flushes and straights are.

The fact sets are harder to spot means that you can usually expect to win a sizeable amount of your opponent's stack when you make 3-of-a-kind in this way.

Fact: The high implied odds of sets is the reason why it makes calling preflop with small pocket pairs so profitable.

Trips are not hidden.

Bet you didn't see that one coming.

Trips are not necessarily a -EV made hands, but in general trips are far less profitable than sets because they are far easier to spot. Players are more cautious if they have a hand like top pair if the board is paired than if the board isn't paired.

For example, if our opponent again has A

but the flop is K

, do you think they're going to keep betting and calling raises like they would on a flop of K

As a result, if an opponent is happy to put lots of money in to the pot on a paired board, they're obviously very happy with the strength of their hand given the circumstances. If you don't have a big kicker to go with your trips, you could well be in trouble.

Obviously a lot depends on the type of player you're up against and your history (see poker metagame), but in general you should be able to see why trips aren't as effective at extracting money from opponents like sets are. You should also be able to see how getting stuck with the second best 3 of a kind hand can prove to be costly.

Sets are ninjas. Trips are liabilities.

Sets and trips in poker conclusion.

If you talking to someone about strategy or about a specific hand history, you should avoid saying “three of a kind” when referring to a made hand. “Three of a kind” could mean either a set or trips, and both of these can have a drastic effect on the way a hand is played, so be specific and say what type of 3-of-a-kind instead.

I think that just about covers everything about trips and sets in poker (or the most important stuff at least).

This has turned in to quite a lengthy article considering I only intended to explain the subtle difference between two commonly used terms to describe 3-of-a-kind, so I'll wrap it up here. Hopefully you learnt a little something extra on the way.

Even if you didn't, at least you have something new to correct people on when they get out of line and start to use “set” and “trips” interchangeably on poker forums.