How To Overcome Bad Beats 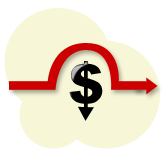 There is very little in poker that can throw you off of your game in such a dramatic way as a bad beat can. Dropping from the high of being all in on the flop with top set against two over cards, to the low of being outdrawn to a runner-runner flush is enough to make the biggest poker fan hate the game.

Despite this however, it is far more important than you think to deal with the frustration before playing your next hand.

Its not uncommon for a player to chase after the money they unjustly lost for the rest of the session. Players will try and pull huge bluffs and call for any draw whilst adopting the mentality of "If they can win with rags, then so can I".

I'm sure as you read this you can recall a time when you have been in exactly the same position, trying your hardest to get back the money that’s sitting in the lap of the luckiest player in the world. But do you get it back? More often than not you are losing more money in this imprudent pursuit.

This is probably one of the main reasons why you currently can't win money playing online poker.

How can you get over a bad beat?

It all seems so obvious now, just stop the tilting and save yourself some money. But lets be honest, its never going to be that easy. Some beats are so bad that they can cloud your mind to all rationality and you fritter away your remaining chips on that ten-high flush draw. But there are things you can do to help stop such an obvious leak of chips:

Honestly, there is nothing better for saving your hard earned money than taking a break from the game. Whether that be for a few moments or for a few days, it's the most effective way of preserving your bankroll from tilt.

Just because you leave the game now, it doesn't mean you've lost the opportunity to win your money back; in fact it’s probably the opposite. Let yourself cool down and come back when you are in a rational frame of mind. There is always going to be a game of poker in the next ten minutes, the next week, and even next year. Save yourself for when you can play at the top of your game.

Simply put, think of the money you expected to win on the particular hand that you lost with. This can be done with the use of freely available odds calculators (like PokerStove). For example, if you are all in holding AA against AK pre-flop, you are roughly 90% favorite to win the hand (also know as pot equity).

So you can say you won 90% of what was in that pot - FULL STOP. The 10% chance of losing means that you expect to lose in this situation occasionally, and this time you just got caught up in that 10% chance. You may end up losing that particular hand but in the long run you will be winning more.

See the article on Sklansky dollars for more information on this concept. It's a good read.

Bad beats are an integral part of poker, so if you want to become a long term winner you are going to have to get used to them. If there were no such things as bad beats, then most of us would never have a losing session. But on the positive side, bad beats are what keep the bad players and soft competition coming back. It tricks them into thinking they made the right play, or that poker is always about luck. And for that we should be thankful.