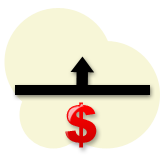 The micro limits (or micro stakes, whatever) on the Internet generally range from 1c/2c ($2NL) to 25c/50c ($50NL) cash games. Due to the small amount of money at stake, you will find the action is much looser than say, at the $1/$2 levels.

If you browse around forums, you will find many people claiming that the micro limits are unbeatable. They claim that all the players rely too much on luck, and with so many players entering pots trying to hit their draws, the ‘luck' they get is just too overwhelming for any decent player to be able to beat these limits.

Micro limit poker is perfectly beatable, but only if you have the correct strategy.

Let me first state that this concept -- despite having a tiny element of truth -- is far from being correct. With so many players calling with bad pot odds for their draws and calling huge raises with half a hand, how can you not beat these levels?

There are a few key micro limit poker tips set out below; be sure to familiarize yourself with them before stepping into your next micro-limit game.

1] Don't try and outplay your opponents.

When you sit down at the table, you can happily think that you are the best player at that table. But being cocky in the micro limits will lead to disaster. If you try and take pots away from your opponent representing that 3 of a kind, and find that they call you down with bottom pair, you have got nobody to blame but yourself.

Remember you are playing for money and not individual pots, only get your money in with the best of it. When it comes to multiple levels of thought in micro poker, these players are usually level 1 (or 2 at best). You only need to be playing one level above them to beat them.

You are expecting your opponents in the micro limits to have a low understanding of the game. So if you bet twice the size of your pot and your opponent calls, you cant rule out that they will have a flush or straight draw, as they probably will not be familiar with pot odds.

Remember that if your opponent has bad odds and calls to try and make his draw, that's a good thing for you, because you will be winning more money in the long run. Just be sure to bet a larger amount into the pot when against multiple opponents to give each of them bad odds to call.

Always make sure that you are giving any players with potential draws bad odds to call when you bet.

Due to the loose action at the micros, you can be expecting players to be going and calling all-ins with all sorts of made hands and draws. If you are buying into the table with the maximum, you are giving yourself the best opportunity to make the most money.

Make sure that when you're all in that you have then best of it, that way you are going to come out on top. Just remember its not often that you are a 100% favorite to win on the flop, so you cant win them all. If you've got the best of it, don't be afraid to put your whole buy in on the line (if you have got the bankroll).

You will win more hands than you lose if you get your money in the middle with the best of it, so buy in for the max to make sure that you are maximizing your wins.

4] Don't give your opponents tips.

After you take a horrific bad beat from an equally bad player, the first thing you will want to do is criticize their play and tell them how bad it was.

But wait, it was so bad that you should be over the moon that they called. If you are that far ahead of them with your top set on the flop, you want them to go all in with their gutshot straight. After all, you wouldn't be complaining if you won that particular hand. Keep your advice to yourself and let the player make the same bad play next time.

It is pretty much basic Texas Hold'em strategy, but this is what works best at the micro limits. There is no need to be tricky with your play, if you make a good hand bet, and if you don't, just fold. You may be afraid to scare players out of the pot, but most of the time they will call you with absolutely any hand.

From my experience playing micro limit poker, players will not often raise pre flop unless they have a solid hand. The game plan for most of the players at the table is to see as many flops as possible, hit a huge hand, then bet and take as much money as they can from it.

Your opponents won't give a second thought to what you might hold; they are only playing to the strength of their own hand. This is why they call decent raises with bottom pair on the flop because they've got a pair. So if you see a player raising pre flop and on every street then beware, they've probably got something good.

Micro players are much happier calling than they are raising.

This is similar to the first point, as bluffing is a way of trying to outplay your opponent. Remember that a large number of players will be seeing the flop, and so a bluff of any kind is unlikely to work. Players will be calling with any half decent hand, so just put your money in when you do make a hand, and when you don't, let it go.

8] Don't be too concerned about your image.

If you only play premium hands and bet with the best of it, don't be too worried that the other players are cottoning on to your game. Players at the micros are far too concerned about the way they play opposed to the way that you play. So don't feel pressured to change gears, as your opponents won't even notice.

You are better off focusing on playing solid ABC poker strategy than changing gears at the micro limits.

As you can see, micro limit poker is a slightly different breed of poker when compared to the other stakes. After you learn the fundamentals of the game, these games should be easy to beat if you keep your cool.

This makes it profitable to multi-table at least 2 tables at a time because at such low stakes you are going to be less reliant on reading your opponents plays. As long as you play ABC poker (nothing fancy) and learn the tips above, you should be on your way to beating the micros.

NOTE: You may be wondering, ‘where is the truth in the statement about the players being too lucky?' (2nd paragraph from top). Well, there is a concept in poker known as ‘schooling'. This is where if a player calls a bet with bad odds to make his draw, the call becomes ‘less bad' as other players call the raise.

For example, if you bet the size of the pot on the turn with a made hand, and your first opponent calls with a flush draw, he is making a bad play because he is calling a 2 to 1 bet with 4 to 1 odds of making the flush. However if 3 other players behind him call, this has changed the odds from 2:1 into 5:1, making his call profitable. This is why you should bet more against opponents with draws when more than one opponent is in the pot.