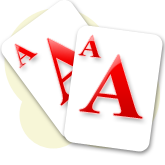 Looking down and seeing ‘the bullets' is one of the highlights of Texas Hold'em. Pocket aces is the #1 starting hand in Hold'em; however, this is where people make the first mistake.

Pocket aces are by no means invincible, and if they are not played with caution you stand to lose a big pot. So allow this quick guide to help you learn how to play pocket aces profitably the next time you pick those bad boys up.

Always look to make a bet or raise with pocket aces.

We have to realize that pocket aces are not the type of hand we want to play against multiple opponents. The ideal situation is to be heads up on the flop. Therefore ‘limping in' in early position is a dangerous tactic and you should avoid doing so. After all, if you do limp then you could be facing numerous opponents on the flop, at which point you have to be prepared to fold your hand to any significant amount of action unless you hit your set.

Always look to raise with pocket aces as opposed to limping in and trying to be tricky. The last thing you want to happen is to be facing multiple opponents on the flop.

A second situation that could arise from limping in is being raised by another player. When facing this raise most people will re-raise once more and this will set alarm bells ringing in the heads of your opponents, because what kind of hand are you holding if you limp then re-raise the raiser?

9 times out of 10 the person making this move has a monster starting hand. Therefore you should more often than not raise when holding pocket aces, it lets your opponents know that you have a big hand but not how big, and it helps to define your opponents hands if they call.

On the flop you again will want to be betting and raising, after all this is the only way you are going to be able to get more money into the pot. If you are heads up against one opponent you may want to check and induce a bluff if he is an aggressive type of player when in first position.

In general, you want to continue betting and raising to build the pot as much as possible with pocket aces. It is not advisable to continuously slowplay this sort of hand. You make more money by betting.

Be sure never to slowplay if the board is coordinated and your opponent is drawing to a straight or a flush; you want to make him pay and give him the wrong pot odds to draw to it.

(Note: When playing online make sure you leave a little time between betting into the pot on the flop. When people raise pre-flop and then bet a large amount into the pot immediately when it is their turn to act it is a big giveaway that they are holding the over-pair, so take a little time!).

It must be stressed that aces are definitely not a hand to be slowplayed. Many amateurs fall into this bad habit because they are the #1 starting hand. But this is only before the flop. After the flop it is a different matter, if you don't hit a set just remember... all you have is one pair.

You should always be thinking, "Okay, what could my opponent have that would beat me?" and try to figure out whether he has that type of hand. If you try and slowplay your hand to the end, do you think your opponent is going to call a large bet or an all-in with ace high or a pair? Because those are the only hands you will be beating at the end. If your opponent does call, its goodbye to your stack as very few are going to call with anything less that two-pair.

Aces are not a hand to be slow played. The ideal situation is to be all in on the flop against your opponents. However this is not going to be likely, especially in a cash game. The second best situation is to use the tactics mentioned above by minimizing the number of opponents and getting money into the pot by betting and even raising.

But remember, with pocket Aces you only have one pair, so be prepared to let them go when facing a lot of action. The ability to lay down strong hands what makes the difference between good and great players.