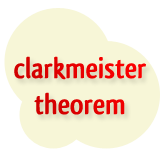 This is another specific theorem like the Baluga Whale theorem, and similarly it is not too difficult to grasp. The thoerem was initially put forward for limit Texas Hold'em games, but it works perfectly well in the no limit Texas Hold'em environment.

The Clarkmeister theorem states that:

“If you are heads up and first to act on the river, if the river card is the 4th card of a same suit you should bet”.

I can't find a reliable source for this theorem, but I'm confident that it stems from the 2+2 forums from a few years ago.

Why is the Clarkmeister theorem effective?

The Clarkmeister theorem works well because of the following reasons:

If you put yourself in the shoes of a player that is facing a strong bet after that 4-flush card hits on the river, you can already feel yourself leaning toward folding anything less than a flush, along with weak flushes. Therefore you can see that this is a prime opportunity for a bluff for the player that is first to act, as you are going to fold the vast majority of your hands in this spot.

How to use Clarkmeister's theorem in Texas Hold'em.

If you are not first to act, it makes your bet a lot less convincing and so the bluff will be less effective. If your opponent checks to you and you bet, it makes it more obvious that you are trying to pull off a bluff. Therefore as the Clarkmeister theorem states you should bet when you are first to act.

The more players there are in the hand, the more likely it is that someone actually has a great hand. If you are heads up there is a greatly reduced risk of your opponent actually having a strong flush or better.

By making a strong bet, it puts your opponent to a very tough decision, and increases the chances that they are going to fold. If you make a weak bet, then you are pretty much giving your opponent good odds to call, and so your bluff attempt it going to be pretty poor. Show no fear and make a decent bet if you really want the Clarkmeister theorem to work.

Similarly, if you have a hand like a weak flush at this stage in the hand, you will be best served check/calling as opposed to betting out. This is because you will only be forcing weaker hands to fold, which doesn't provide you with any value. This would be referred to as a way ahead / way behind situation, and so check/calling is better than bluffing.

Is the Clarkmeister theorem still effective?

Yes. It is not bullet proof like Zeebo's theorem, but I think it is on par with the Baluga theorem in terms of reliability.

This theorem should work brilliantly against the weaker players, which means that you will be able to steal your fair share of pots with it. Be sure to use your knowledge of your opponent and the information from previous betting rounds to help you when deciding whether or not to make this play, as this will help with its overall success rate.