Way Ahead Way Behind 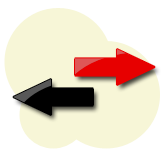 The way ahead / way behind concept (WAWB or WA/WB concept depending on which forum you are coming from) is a fairly simple one that occurs quite frequently in Texas Holdem.

You can tell that you might be in a WA/WB situation when you have a strong hand, but the board and the plays being made indicate that you may be in some trouble. The best way to describe this concept is to give you a nice example of a situation where you could either be way ahead or way behind.

Way ahead way behind example.

Lets say you are in middle position with A

and you make a 4BB raise and get called by a player in late position, leaving you heads up going to the flop. The flop comes down A

, giving you top pair with a Ten kicker. The action is on you.

This hand is a good example of you either being way ahead or way behind. This because your opponent will either have a hand that has you beat by some margin ( AK, AQ, AJ or a 9), or a hand that is easily beaten by yours ( TT+, KQ, KJ, QJ). In each of these situations one of the players is unlikely to win the hand if they are behind. 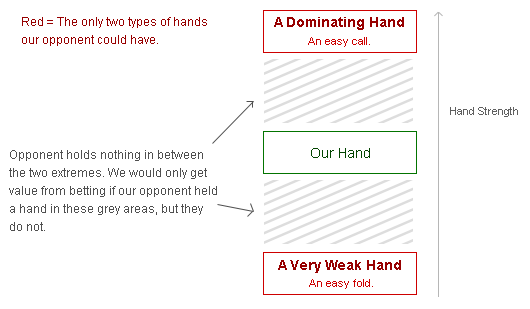 If this just confuses you more, then I apologize. I just hope it helps you to visualize the wa/wb concept a little better.

How should you play in WA/WB spots?

The problem with WA/WB situations is that if you are aggressive, you will either be scaring your opponent away from the hand or digging yourself into a hole. If your opponent is behind, they will simply fold and save their money. However, if you are the one that is behind, you are throwing money into a pot that you have little hope of winning.

Therefore the best approach in these situations is to play passively, and allow your opponent to make the plays in such a way ahead / way behind situation. If your opponent has the worst hand, you are offering them the opportunity to make the mistake of betting with the worst hand. Conversely, by checking to them, you are minimizing your losses if you are indeed way behind in the hand.

Way ahead way behind spots are one of the very few times that I will intentionally slowplay strong hands.

The biggest problem with WA/WB situations is that it is difficult to work out whether you are losing or if you are ahead. This is why the best approach in these situations is to play passively, and check/call on betting rounds to reduce the amount of money you are losing if you are behind. So essentially, you are going into damage limitation mode rather than all out all or nothing mode by playing aggressively.

The key point is that you cannot bet for value, and so you want to induce a bad value bet or a bluff from your opponent. Any other play would be losing you money in the long run, so play it cool and make the optimum plays in these particular pots.

Be sure of WA/WB situations.

Always try and be sure of when you are in a WA/WB situation before you decide to play passively, otherwise it could have unfortunate consequences. Look out for hands that have:

Similarly, if the board is straightening up and there is a possible straight draw available, it again makes it less likely that you could be in a WA/WB situation. If you were to play passively, there is a good chance that you will let your opponent catch up and take the hand away from you. So essentially, there is a greater probability of the WA/WB situation arising on a dry board than there is on a wet board.

Way ahead way behind concept evaluation.

Way ahead / way behind situations are quite common in no limit Texas Holdem, but it should not be an excuse for you to play passively if you are not sure where you stand. If you are confident that you are WA/WB, then passive play is the key, but if you are not then you are going to lose money through making weak plays and allowing your opponents to catch up.

The best way to identify a WA/WB situation is to consider how the rest of the hand could play out, and think about what you opponent could possibly be calling or betting with. Having a thorough think about each situation always helps to identify what is going on in the hand, and thus you are able to make the best plays. As a rule of thumb, if there are no possible drawing hands, then its a good idea to consider whether you might be way ahead or way behind, and play accordingly.