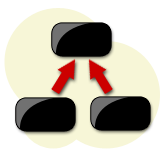 Multi-table poker tournaments (also known as MTTs for short) of all field sizes and buy-in levels can be found online 24 hours a day.

This article will cover basic multi-table tournament strategy at the various stages that a tournament will go through before the lucrative final table.

We will start by looking at the key factor of how the prize pool in a multi-table online poker tournament is distributed – and the big influence this needs to have on your strategy in order to maximize your poker winnings over time. Next we go through the early, middle (including the bubble) and later stages of a poker tournament showing what factors influence your strategy at each point.

Tournament prize distribution is very ‘top heavy’. The players who reach the final table will split up to half of the total prizes between them – while those who make it into the first paying spots only will often win less than twice their initial buy-in. Even at the final table the top 3 paying places will give a disproportionately larger payout than the other places.

This has a large effect on tournament strategy for those players who are looking to maximize their long-term profits. Aggressive, positive play is rewarded at all stages of the tournament - by a shot at reaching the final table. Passive play during the later stages may enable you to sneak into the money positions – however this will not make up for just a few final table appearances when adding up profits at the end of the month or year.

In the very early stages of a poker tournament the game plays in a similar way to a cash game table. This is because the stack sizes are many times the size of the blinds, allowing betting on the flop, turn and river for many hands. ‘Deep Stacked’ play involves its own adjustments including favoring hands which can make hidden ‘monsters’ such as small pairs and suited connectors. Hands that are easily dominated such as Ace-Ten and King-Jack should generally be avoided at this stage.

Your strategy objective in the first few blind levels should be to accumulate chips from the weaker opponents who will still be in the tournament at this stage. At the same time you should avoid big ‘gambles’ for all of your chips if you feel that your skill advantage will have time to show over a larger number of small pots.

One saying for the early stages of multi-table tournaments is that ‘you need to take the chips from the weak players before someone else does’ – after all they will be harder to take from a stronger opponent later down the line.

Transitioning from early to late stages.

As the blinds and antes get higher when compared to the average stacks your tournament strategy needs to adjust to new conditions. Since you must invest more chips to see a flop the value of the speculative hands played in the early stages goes down.

High cards however go up in value when you are the first to enter the pot. Since calling a raise in the middle stages requires investing a large proportion of your stack this should be avoided where possible. Your opponents are often in the same situation – meaning that you’re raising requirements can be ‘lighter’ than before, especially from late position.

Playing on the bubble.

The bubble is the stage of the tournament where just a few players need to be eliminated in order to reach the money paying places. At this stage the single most important factor affecting your strategy are stack sizes – both your own and those of your opponents.

Having a large stack at the bubble will allow you to pick up many pots uncontested – as players will be less likely to fight with a big stack when they risk busting out before the money. Other big stacks and very short stacks should be avoided here, as they are more likely to call you.

If you have a medium stack at the bubble then you can use the knowledge that bigger stacks are likely to steal pots to your advantage. If you are dealt a reasonably strong hand and expect the big stack to be ‘raising light’ you can have a positive expectation situation for a re-raise. Sure you will get unlucky and bust out sometimes – but your strategy for the whole tournament is to reach the final table and doubling up could give you a chance to do so, more than making up for losing the small ‘in the money’ payout.

After the bubble ‘bursts’ players will often loosen up considerably in an effort to accumulate enough chips to reach the final table. At this stage you need to choose your spots carefully. As with all forms of poker it is better to be the raiser rather than the caller.

The final table brings in yet another factor into your poker strategy thinking. Stack sizes are still very important, but now the payout structure – and your opponent’s strategy in relation to this come to the fore.

The presence of a very small stack is a good example of how this affects the dynamic of the final table. Medium stacks will see that one player is just 1 big blind away from busting and will tighten up to avoid going out before this player. This can lead to some great opportunities to pick up chips without too much risk.

Aggressive and positive poker are again the key elements to success at this stage of the poker tournament. The top three places will pay proportionately more than the rest – aim high by picking fights with those opponents who look like they would like to move up in the money. Big stacks and small stacks should again be avoided, the medium stacks are much more likely to fold to pressure at this stage.

In summary, tournament strategy involves adjusting to the various stages which a poker tournament will go through. At the same time your goal in every tournament should be to reach the final table. Busting on the bubble never feels good – however if for each time you bubble you reach another final table then your long-term profits will be better than that of opponents who tighten up in order to make the money.