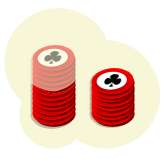 It sounds like a term that would be a little complex at least, but it's actually the easiest concept you'll ever learn about in poker.

What are effective stack sizes?

The effective stack size is the size of the smallest stack when two players are in a pot.

That's it. No equations, no tricky theory.

When two players are up against each other in a hand, the effective stack sizes for those two players is the size of the smallest stack. Bam.

This is one of the few situations in poker strategy where examples are actually overkill. But I've got plenty of time on my hands, so…

What about effective stacks and multiple players?

The effective stack size is only a consideration for two players at a time. For example, if you had four players with these stack sizes:

You wouldn't say that the effective stacks for all the players is $50, just because the smallest stack out of this set of players is $50.

When two players are heads up in a pot, neither player will be able to bet more than the amount of money in the smallest stack.

You are playing $50NL. You have a full stack of $50, but the only other player in the hand with you has a $20 stack. In this situation, you effectively may as well have a $20 stack too. You can't force the other player to put more than their $20 in the middle, and they're not going to be able to make you put more than $20 of your $50 stack in the middle either. This isn't a dodgy poker movie scene.

In this situation, that extra $30 you have is essentially useless. Or, keeping in with the theme of this concept -- "ineffective".

This is a vitally important concept, because the fact that you are now effectively playing with a $20 stack should influence the way you bet and play your hand. If you're not sure why, I'll explain in just a moment.

Note: The idea of “effective stacks” is most suited to pot limit and no limit poker games. The chance of players getting their entire stacks in the middle in fixed limit games is incredibly slim, so it's not a concern.

So the next time you're chatting with a friend about a hand you've played, instead of saying “I had $50 and she had $20”, you may as well say “the effective stacks were $20”. Mentioning the size of each individual stack is pointless -- the “effective stacks” is what matters.

It's always important to take in to account the stack size of the player(s) you are up against. If you didn't already know that, you've got a bit of learning to do.

Here are a few quick pointers:

If the effective stack sizes are small, you are not going to have the opportunity to get paid off as much if you are drawing to a flush (or something like that). Therefore, it makes it less profitable to chase draws or set mine if you or your opponent have a small stack.

Conversely, if the effective stack sizes are huge, it makes it a lot more profitable to chase after strong draws.

Bluffs are harder to pull off when the effective stack sizes are small because you will have less fold equity. Smaller stacks are less threatening than bigger stacks.

A note on short stackers.

Short stackers (players that intentionally play with a short stack) take full advantage of the concept of effective stacks. It allows them to cap the amount of money that can get put in to the pot against every opponent they enter a hand with (assuming that their opponent does not have an even smaller stack again).

Being able to play short stack poker 100% of the time means that they rarely get further than the flop before they are all-in. As a result, the number of decisions they have to make is limited, and the decisions they do have to make are far easier. This is why many beginner players enjoy playing short stack poker, and why they are disliked by competent full-stack players.

Apologies for the slight rant there, but it's a perfect example of how the effective stacks concept is utilized and exploited by some players in the game.

Check out Crushing Shortstackers (20bb) and Playing Against Cappers (40bb) for strategy on beating various types of opponents who force you to play with smaller effective stack sizes.

The effective stack size is the size of the smallest stack between two players.

Note: I'm confident I butchered the grammar when it comes to usage of the words "is" and "are" in parts of this article. Using the term "effective stacks" as a noun threw me off. I'm hoping it isn't too much of a mess.