"Small Ball" is an advanced style of play that was initially coined by Dan Harrington in his Harrington on Hold'em series of tournament strategy books.

However, this term and style of play later gained more recognition through strategy articles and videos by Daniel Negreanu. You can see a bunch of videos on how to play small ball on Negreanu's PokerVT training site.

In fairness though, it's hard to give either Harrington (or Negreanu) full credit for this style of play. It's likely that this style had been employed by many professional poker players before them, but they just hadn't named it. 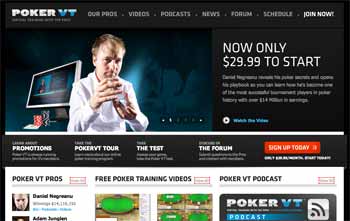 Daniel Negreanu currently runs the Poker VT training site, where you can find strategy videos on how to play small ball poker.

What is small ball poker?

Essentially, small ball poker involves playing a wider range of starting hands more aggressively, but only using small bets and raises to save you from losing too much money when certain plays do not work out.

Small ball poker is intended to primarily be used in MTTs as opposed to SNGs and cash games.

This video gives a basic overview of the small ball playing style.

It's impressively cheesy with some comically bad acting thrown in to the mix, but all the essential information for basic small ball strategy is there.

Why can small ball poker be effective?

This style of play can be very effective because you create a very loose table image for yourself. Therefore you should receive more action from opponents when you do have a big hand because they will perceive you as a loose aggressive player, and may feel that you are more likely to try and bluff them out of the pot.

If you play small ball poker correctly, in the long run the amount you win from opponents when they call you down with sub standard hands should outweigh the amount you lose from making consistent raises and bets without a strong hand. This is a reason why it is important to make small raises and bets instead of large, stronger bets.

Small ball poker benefits from players who call you down with mediocre hands because they do not give you credit for holding a strong hand.

The image you project onto the other players at the table is key to the success of the small ball concept. As already mentioned, the reason why this style of play is so effective is because your opponents will be more willing to call you down with marginal hands because of the way you have played in previous hands. So essentially, the small bets and raises that you may win or lose pots with in earlier hands are just setting you up for bigger hands later on in the session.

Opponents must be aware of your style of play for small ball poker to work.

If other players at the table are loose and are going to call your bets regardless of what table image you project, then you are better off playing a tight-aggressive style rather than small ball poker.

How to play small ball poker.

When playing small ball, you have to try and take advantage of position as frequently as possible. It is not going to be an effective style of playing if you are raising 2.5BB from under the gun or in any early position on a regular basis. The chances are that you are going to get a caller and be out of position in a pot with a hand that is probably marginal.

Save the raises for when you are closer to the button and there are little to no players already in the pot. Playing small ball poker relies on you being able to play well post flop because you are entering so many pots and allowing other players to do so cheaply. It is going to be far easier to outplay your opponents if there are less of them in the hand and if you have position.

You have to be an experienced player to be able to profitably employ the small ball playing style.

Another key point to playing successful small ball poker is starting hand selection. If you are going to enter a pot by raising with a less than a premium hand, then it is important that the hand you raise with has some kind of potential.

Although we are raising with less than premium hands, it does not necessarily mean that are trying to take down the blinds alone on every hand. There is a high chance that we are going to get a caller because our raises are relatively small, and so we are going to need a hand that we can work with after the flop.

The type of hands we want to play when playing small ball are connecting cards and suited cards that have some potential if/when we go to the flop.

By playing hands with potential it gives us some room to make plays and possibly make very strong hands on or after the flop. However, you should avoid getting too involved in hands when you hit middle or top pair. The chances are you will have a weak kicker, and as a general rule these types of pots should never become too big if you are going to win them.

Where is small ball poker most effective?

Small ball poker is going to be most effective in situations where the blinds are small relative to the size of the stacks. Therefore, this will be at the start of MTTs and SNGs and in cash games.

Small ball would be most suited to cash games and the early stages of tournaments.

Toward the end of tournaments the blinds will usually be too great in relation to the size of the stacks to play small ball, as there will be little room post flop plays. The last thing you want to be doing in a tournament is committing a quarter or more of your stack into a pot with a marginal hand before the flop.

Small ball would therefore be most effective at the start of tournaments. It would be fine to use in MTTs, but with SNGs there is a problem in that the structure is usually quite fast, and the period to play effective small ball will not last for long.

In addition, the image you create will become almost worthless near the end of the SNG tournament because the blinds will become so great that opponents will be forced into folding or calling regardless of what your image might have been at the start of the tournament.

Like the idea of getting coached by Daniel Negreanu? Check out his PokerVT training site.

What do I think of small ball poker?

Raising small amounts from any position at the table with marginal hands in an attempt to recreate the "small ball" style of play is not going to be a successful strategy in my opinion. In spite of this, there are actually a few genuinely effective elements to the small ball style though, such as:

I believe that amateur players who attempt to emulate small ball poker will get themselves in to tricky situations. You definitely need a good post-flop game to be able to play small ball poker (or should I just say LAG?).

As your game improves you may develop in to more of a loose-aggressive style of play, but that will not necessarily be "small ball poker". I believe that Daniel Negreanu may be trying a little too hard to coin a super-awesome new playing style that will take over the world of poker, but at the end of the day it's just a weak variation on an existing one.