How Important Is Rakeback? 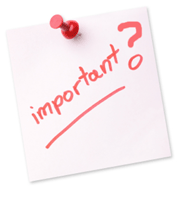 How important is rakeback exactly? Is it something that you should try and get whilst you play at all costs, or does it not really make much of a difference either way?

I'll give you my brutally honest opinion on the matter for you to help answer these common questions.

Firstly, to all players new to rakeback.

I'd strongly recommend that you get rakeback if you're not getting it already.

It saves you more money than you might think. Head over to the Texas Hold'em rakeback rooms section and choose a good rakeback room to play at. I'd highly recommend Full Tilt Poker rakeback.

So, how important is rakeback then?

I would definitely get rakeback, just as long as I enjoyed playing at the room I intended to play at.

To give a quick example, let's say there are two rooms; room A and room B. If I enjoyed playing at these rooms equally as much, but room A offered rakeback, I would always choose A over B. Easy decision.

However, there is a lot of middle ground when it comes to rakeback and rooms we enjoy playing at. Not all of us are lucky enough to find a room that we love playing at and offers a rakeback deal at the same time.

What if I can't get rakeback at my favourite room?

These rooms may well be your favourites to play at, so is it worth uprooting and moving to a completely different rakeback poker room?

The answer to this question rests on whether or not you would enjoy playing at the new room that offers rakeback. The only way to find out is to try them. The two most popular rakeback poker rooms aside from Full Tilt are:

If you enjoy playing at either (or both) of these rooms, then perfect. They may not be as good as rooms like Full Tilt and PokerStars in the software and traffic departments, but if you're comfortable playing at these rooms then that's your problems sorted.

However, if you don't like either or these rooms for whatever reason or any of the other rakeback room alternatives, you will have to evaluate how important rakeback is to you when deciding which room to play at.

Evaluating the importance of rakeback.

As a casual player you're not really going to have the feeling that you are missing out on anything by not getting rakeback, as the earnings will be minimal. Therefore, PokerStars would be a perfectly viable option for you. However, as a more serious player that puts a lot of hours in at the table every week, you almost feel compelled to get your hands on rakeback.

The more you play, the more you should strongly consider playing with a rakeback deal, even if you're not a big fan of the room you are playing at. The money you miss out on becomes too great the more you play. In spite of this, you do not want to go so far off the scale that you hate a room so much that it tilts you and you start to see poker as one big frustrating chore. 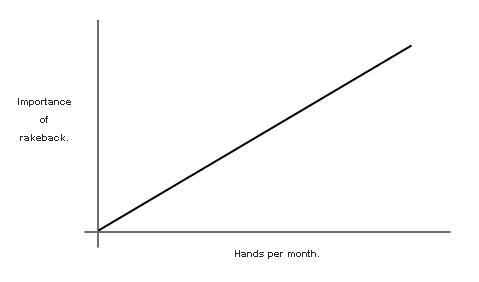 It actually annoys me that I can't give more of a clear cut answer here, but for all you regular players out there you really need to ask yourself how valuable an extra 30% rakeback or thereabouts will mean to you, then go from there.

A recurring point throughout this article is that when choosing a poker room, you should go for a room you enjoy playing at as the main requirement. The order of importance for poker rooms in my opinion will always be:

Poker is meant to be fun, so don't put yourself through hell by playing at a room with infuriating and even worse support, regardless of how attractive the rakeback deal is. I'd rather be happy as opposed stressed and tired just for an extra buy-in at the end of the month.

Final thoughts on the importance of rakeback.

I always aim to get rakeback unless I have good reason to play at a room where I can't get rakeback, but that's because I'm a regular player that relies on winnings more than a casual player. I will play at the not-so-awesome rooms, but that's only because I don't mind playing at them.

Try your best to play at a room you enjoy, but ultimately the decision on whether to play at a less favourable room for rakeback comes down to how much a rakeback deal means to you and your earnings at the end of the day.

Rakeback is an additional bonus, not something that dictates where you should or should not play.

Go back to the rakeback poker rooms.