When a poker room is calculating your rakeback from the cash games you have played in, they will use one of 2 (well, technically 3) possible methods for working out how much rakeback you receive.

Different rooms will use either one method or the other, although the contributed method for working out rakeback is the most popular at the moment. The most popular rooms that use the less-common dealt method are Full Tilt and Cake Poker.

The contributed method calculates rakeback from the amount of money that you have put in to the pot. 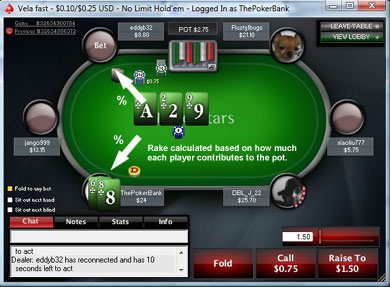 Let's say you end up playing a $60 pot in a $100NL game with 3 other players at Aced, where you get 30% rakeback and the contributed method is used. If you had put $25 of your own money in to that $60 pot, your rakeback would be worked out from the rake generated from the $25 you put in to the pot.

The other players' rake and rakeback will be worked out based on how much they had put in to the pot as well.

The dealt method calculates rakeback by sharing the total rake paid between all the players that had been dealt a hand at the table. You do not have to play a pot to get a share of the rakeback with this method, you just need to be dealt a hand. 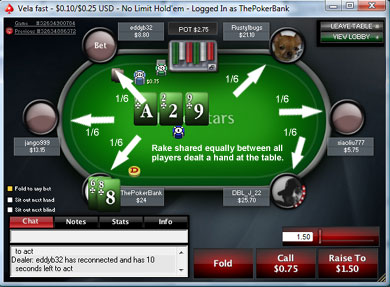 Let's say you are sitting at a 6-max $100NL table at Full Tilt, where the rake is 27% and the dealt rakeback method is used. The final pot again reaches $60, but you folded preflop didn't put any of your own money in to the pot. Nonetheless, the rake and rakeback will be shared equally between all 6 players that had been dealt a hand before the flop.

In this example it would not make a difference if we had put $30 or $0 in to the pot. As long as the final pot reached $60, the $3 rake and rakeback would be shared equally amongst all 6 players at the table.

The shared method is quite like the "dealt" method in that the rake is shared equally between players at the table.

However, the difference is that to be included in the rake that's shared at the table you have to voluntarily put money in the pot. Therefore you will not generate any rake in the shared method by being dealt a hand and then folding like you would with the standard dealt method. 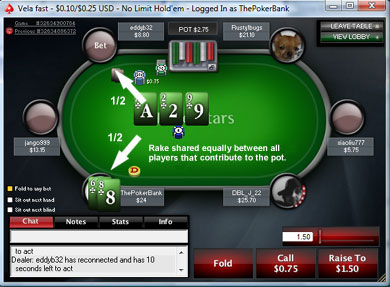 The other 2 players that did not enter the pot and folded their hand before the flop will not receive a share of rakeback from this hand.

None that I know of today.

This must have been an old method for calculating rake that is no longer used in favour of the more straightforward "dealt" method.

Which type of rakeback is the best?

In all honesty though, the amount of rakeback you get from either of these methods will work out to be near-enough the same over the long run.

I wouldn't choose one room over another simply because I preferred the contributed method to the dealt method or vice versa. Even if you are a very loose or tight player, the difference in the amount of rakeback you receive will be minimal (assuming the rakeback %'s are the same).

It's nice to know the differences between the different types of rakeback, but I wouldn't let it influence my decision when it comes to choosing a rakeback room to play at.

If you want to see some math behind contributed vs. shared, check out this 2+2 rakeback calculations thread.

Go back to the rakeback poker rooms.