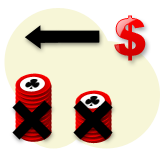 "Blind stealing" is a term used in poker for when a player in late position raises pre-flop in an attempt to win the uncontested blinds.

This strategy is often effective because the players in the blinds will have any random two cards, meaning there is a small chance that they will have a hand worth calling a raise with, allowing you to take their blinds.

In addition to this, the players in the blinds will be first to act against you if they do call, so they should know that they need a better than mediocre hand to pay to see a flop.

In terms of poker strategy for blind stealing, you will find yourself in two different positions during a game.

How should you play in both of these situations? The recommended plays are determined by whether you are playing in a tournament or a cash game.

Blind stealing is most effective in tournaments (for example; sit n go's and multi table tournaments). If you are in need of chips, you sometimes cannot afford to wait for a premium hand. Therefore blind stealing offers a great opportunity for you to accumulate chips.

In cash games the blinds are usually very small in relation to your stack. This means that from a purely money making point of view, blind stealing is not going to be very profitable. In general you want to stick to playing good hands and avoid risking money with a weak hand.

However, blind stealing in cash games should be based on whether you feel you can easily out-play your opponents on later betting rounds if they call, and take the extra money they put into the pot. This play is aided by the fact that you will be last to act on each round, giving you a much better opportunity to win. But be sure not to use this play on every orbit because the players in the blinds will become wise to your game.

I would not recommend stealing blinds in cash games on a regular basis as a method of winning more money.

Defending against players trying to steal your blinds.

As a general rule, you should not actively attempt to protect your blinds on every round. You have to remember that you are going to be first to act against anyone who tries to steal your blind because of your poor table position, so if you call and don't hit the flop hard, what are you going to do?

In both situations you will have no idea what your opponent has and you are risking a decent amount trying to take down a "nothing pot". Information is key and without knowing anything about your opponents' hands, protecting your blinds isn't going to be profitable in the long run.

It's never going to be as easy as you might hope to defend against a player stealing your blinds. It's better to let them go rather than dig yourself in to a deeper hole by fighting back.

You should remember that after you have posted your blind, it is no longer your money. The money now belongs to the pot and not to you. This is the reason why many players can lose a lot of money to raises when in the blinds, as they believe that the blind is still their money and that they have to defend it. This is not the case

In certain circumstances however, you can effectively deter your opponents from stealing your blinds on future betting rounds. If you feel a player is betting in late position in an attempt to steal, a decent re-raise on your part will make them think twice about trying to steal on future rounds.

Even if your opponent does call your re-raise, the fact that you made the play you did shows that you have the capability to re-raise anyone who tries to steal your blind from late position. This play is most effective when the blinds are small in relation to your stack, as you are not risking as much of your stack and not forcing yourself to become committed to the pot.

See Calling From The Blinds vs. A Steal for further strategy.

Blind stealing is dependent on the size of the blinds in relation to the effective stack sizes. It becomes less effective trying to steal the blinds when they are small because you are potentially putting a lot of your stack at risk for a small pot. One of the worst things you can do in the face of a possible blind steal is call.

This means that you are putting more money into the pot, which your opponent has a good chance of taking away from you. If you are ever in doubt, simply play to the strength of your hand. Fold your weak hands and re-raise with your strong hands.