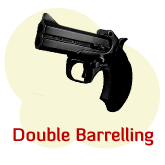 So you made a continuation bet on the flop, but annoyingly your opponent went ahead and called it. You’re now stuck in an uncomfortable situation staring in to the eyes of an unwanted turn card desperately searching for a new plan of action. What do you do?

“Double barrelling” or “firing a second barrel” is the tricky art of making another continuation bet on the turn. It’s difficult to master and forces you to risk more money than your previous bet, so you really want to make sure that you make the right choice.

In this article I will outline the basics of firing a successful second barrel on the turn.

A lot of awkward situations on the turn are caused by poor continuation bets on the flop. If you don’t have a game plan on the flop and you blindly fire out a c-bet hoping for the best, what do you expect to happen from time to time?

Good continuation bet strategy is out of the scope of this particular article, but it’s definitely worth building a strong flop c-betting strategy before jumping in to double barrelling strategy. Walk before you can run.

1) Barrelling a calling station is fun if you want to throw money at someone, but otherwise remember the principle that trying to bluff players that rarely fold will diminish your bankroll.

Do you see a pattern forming here? There more you think and the more you know about your opponents, the easier it is to determine whether firing a second barrel is a good idea or not.

3) If you’re firing a second barrel you are doing it as a bluff or a semi bluff to try and win the pot there and then. As with any bluff, it’s always a good idea to have a hand with at least some equity (a hand that could still win the pot on a fortunate river card) to soften the blow when your double barrel doesn’t work out.

Generally speaking, you will most likely be c-betting the flop with two overcards (eg an A

style hand) a lot of the time, and so you should have at least when overcard when you decide to fire that second barrel on the turn. Having just 1 overcard is the least amount of “equity” you want to be barrelling with.

Don't barrel the turn unless you have some chance of winning the hand by the river if called. The more equity you have in the hand the better. This applies to most bluffing situations in poker.

4) This is the key tip that this strategy article is going to focus upon. If the turn card scares your opponent, it increases your chances of pushing them off their hand by firing a second barrel. More on this in the upcoming section.

5) You also want to bet on the turn when it actually improves your hand, not just when you are carrying on with a semi-bluff from your continuation bet. You do this for balance. Your strategy becomes exploitable if you only ever fire a second barrel when you miss.

When to double barrel.

The best kind of turn to double barrel on is when the turn is an overcard to the flop.

These turns are perfect to double barrel because they hit your perceived range and are bad for your opponent’s range. In other words, our opponent is likely to have called our continuation bet with hands like top or middle pair, so the overcard on the turn makes them very uncomfortable.

These overcards could have very easily hit our range, beating the hand that they currently hold. For our opponent, calling a bet on the turn is a difficult thing to do without a premium hand after this scare card hits, as they will be much happier folding and saving their chips to your barrel.

These cards are likely to have improved or not significantly weakened the range of hands that our opponent would have called with on the flop. Our opponent may well have called with a smaller pair or drawing hand, and all of these turn cards just make all those sort of hands better.

If the turn card isn’t bad (or is actually good) for our opponent, they’re going to happily call yet another bet on the turn.

In general, avoid barrelling low turn cards or cards that pair the board.

Decent, but not great turns to barrel are high cards that are just below the highest card on the flop.

These cards are still slightly scary because they make it difficult for your opponent to continue with middle or bottom pair hands that they may have called with on the flop. On the other hand, if your opponent called with top pair on the flop they may well stick around for the ride, which is why these turns are not amazing to barrel.

Firing a second barrel on these turns is not going to be quite as successful or easy to do as the “good turn cards”, which is why I would advise to only barrel these turns with a very good read.

There are so many variables and reads involved with double barrelling that I’m never going to be able to cram enough information in to one article to form a 100% complete guide to it. Try and absorb as much as you can from what I’ve thrown at you here and mix it with a bit of your own initiative (maybe not too much if you’re a new player) to form your own approach to firing that second barrel.

Before you go, I just want to remind you that even if your attempt at double barrelling fails, please do not feel compelled to shove it all in on the river. You’re better off folding than blindly pushing all in out of frustration in a vain attempt to win your money back.

As always, practice makes perfect with the double barrel. It’s definitely one of the scariest plays to master, but you’ll get there eventually. Stick to those scary overcards for barrelling at the start and you should do just fine.