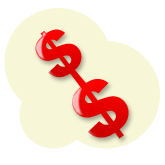 The "continuation bet" (or cbet) is becoming an increasingly popular move at the no limit Holdem tables. The popularity of the move stems from its simplicity and effectiveness, which means that it is easy to learn and be used appropriately on a basic level by players new to the game.

It is hard to play any session at any level without seeing a continuation bet being utilized, and you are putting yourself at a great disadvantage if you are not aware of it.

What is a continuation bet?

A continuation bet is simply a bet that is made on the flop if you were the pre-flop raiser, even if you did not improve your hand on the flop.

So if you raised pre-flop with A

and the flop came 4

, you can give yourself a chance of winning the pot by making a bet, despite the fact you have not made a pair or better.

This play is often successful because of the fact that 2 times out of 3 your opponent will not make a pair on the flop.

This means that if your opponent folded their hand each time you made a continuation bet and they did not connect with the flop, you will be winning more pots on the flop than if you simply checked. This is the most basic principle behind the play, but there are numerous other factors that influence its' success.

How to make a good continuation bet.

A good size of a continuation bet should be around 2/3 to 3/4 the size of the pot. So if the pot were $10, a $7 bet would be an appropriate amount for a respectable continuation bet. If the bet is too low, it invites opponents to call because they have good pot odds if they are on a draw or if they have a half decent hand.

When we make this play we want to make it appear as if we have a very strong hand like top pair or better scaring our opponents out of the pot, and betting between 2/3 to 3/4 the size of the pot does this very effectively. However, if we over bet the pot (for example $14 into a $10 pot), we are investing too much money into the hand and risking more than we need to when a smaller $8 bet will have the same effect.

Take in to consideration reads on your opponents.

The strength of your opponent's ability should influence your decision on whether or not a continuation bet should be made. At the lowest levels you will find that opponents are more willing to call bets with any sort of hand.

The reduced likelihood of opponents folding at the lower levels means that it may not be profitable to make continuation bets because we are unable to scare off the mediocre hands that they will hold. In addition, the effectiveness of a continuation bet decreases against more experienced opponents because the very good players are able to sense these type of plays and may raise or call knowing that you may be betting with the worst hand.

This means that we should reduce the number of continuation bets we make, as they will be most successful against the average players who are able to fold decent hands.

Using the flop to determine whether or not to continuation bet.

The success of a continuation bet can be improved depending on what cards the flop brings.

and the flop comes 2

However, if you hold A

and the flop comes J

, a continuation bet is more likely to get called because of the flush and straight draw possibilities. As you can see, the play is more likely to work when your opponent can only call if they have a strong made hand with no draw.

Always consider the texture of the flop and how likely it is that your opponent will have made a hand that they will be prepared to call a bet with. The wetter (more co-ordinated) the flop is, the more reluctant you should be to attempt a continuation bet when you have not made a strong hand yourself.

1. The number of players in the pot.
2. Your position in the hand.

Number of players in the pot.

The play is more successful against 1 opponent rather than 2 or more because of the simple fact that there is a greater chance that an opponent has connected with the flop. It is recommended that you restrict the use of continuation bets to when you are up against one opponent, although it is possible to fire a successful bet against multiple opponents.

The less players there are in the pot, the greater the chances of your continuation bet being successful. Try to only use continuation bets when you are heads up in a hand.

You should also remember that the more you use continuation bets, the less respect you will get for them as play goes on. Be aware of the frequency that you use them so that you don't end up being on the end of a re-raise or check-raise from a player who has figured you out.

Position in the hand.

Position also helps because if you are last to act as you have the opportunity to see your opponent act first and decide whether you believe a continuation bet will be successful. But beware of tricky players who may expect you to make a continuation bet and check-raise you.

Continuation bets are more successful when you have position over your opponent(s).

This is not uncommon so try and get as good a knowledge of your opponent as possible before making moves and be prepared to fold if you hold nothing. Don't feel as though you have to call if you get raised because you are more than likely not pot-committed. Just fold your cards and accept that the play didn't work out that time, save your chips for when you do make the hand.

Continuation bets are commonplace in today's Texas hold em poker game, so it is in your best interest to familiarize yourself with them and start incorporating them into your play.

There are no set rules to when these plays will work, but there are guidelines as mentioned above that you can follow to help improve the effectiveness of the play. The best way to learn how and when to use continuation bets is to go and sit down at a table and experiment a little. The good thing about continuation bets is that they are relatively inexpensive to use, so you won't be losing a whole load of money trying to learn how and when to use them.

For more strategy on how and when to making continuation bets, watch SplitSuit's C-Betting Like A Champion concept video.