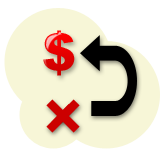 The "check raise" is one of the strongest and arguably the most effective moves in Texas Hold'em poker. Regarded by some as a dishonest move and even banned in certain card rooms, there is no doubt that the check-raise is an important weapon in any winning player's arsenal.

A check-raise is made when you check when the action gets to you, with the intention of raising if your opponent bets, hence the name 'check-raise'.

As you can imagine it is an interesting move because at first you show weakness to your opponent by checking, and then coming over the top of them to show a great amount of strength. This is why it can be regarded as dishonest as it is such a deceptive play, 'trapping' your opponent's bet into the pot.

So why should you use the check raise?

The check raise is useful in both bluffing your opponents out of pots and getting more money into the pot when you have a good hand. The check-raise also brings a dynamic element to your game by making you become more unpredictable to your opponents.

It is rare to find an amateur player using this move in a poker game, so if your opponents see you using this move they can be fairly sure you know how to play good poker, and may think twice about bluffing you out of future pots. Below are the two areas that describe how the check-raise can be used for bluffing, and getting more money into the pot with a strong hand.

Check-raising as a bluff and semi-bluff.

The check raise is arguably the strongest move in poker, and so for this reason it is exceptionally useful when trying to pull off a bluff. This move is most effective against one opponent and becomes less successful as you increase the number of opponents, which could really be said for any type of bluff. 3 criteria should be met in order to make a good check raise:

A check raise will only work when you are first to act, otherwise you will simply be raising (if you are last to act).

There are certain criteria you should follow in order for this to be successful.

Be confident that your opponent has a hand they can fold.

Secondly, the re-raise made by you should be at least twice your opponent's bet. For example if your opponent bets $5 into a $10 pot, you should bet $15, re-raising another $10. This is because a minimum re-raise is likely to have little effect on your opponent, because they will only have to call a small amount relative to the size of the pot in order to see the next card. However, if you are re-raising them at least twice the amount they bet, it will make them think a little bit harder about whether they want to pay as much to see the next card.

Aim to make re raises at least twice the size of your opponent's bet. You do not want to give them good odds to call by minimum raising.

Check raises tend to be more effective in small pots.

Thirdly, you are more likely to pull off a bluff when the pot is small. This will be because the amount your opponent must call to see the next card will be larger relative to the size of the pot, giving them the wrong pot odds or to call to make a second pair or to make their draw. Therefore a check-raise will be more effective on the first actual round of betting, such as on the flop in Hold'em. If there is no betting on the flop then a check-raise will still be as effective on the turn because the pot has remained the same size, because there will have been no betting since the pre-flop betting round.

Finally, you will save yourself more money in the long run if you hold a drawing hand, due to the fact that your opponent will occasionally call your re-raise. If you have no hand, you will have to check and give up your hand to any bets on future rounds, losing the full amount of money you used in the actual raise.

However, if you have a good draw when your opponent calls, you stand a chance of taking the whole pot when you make your draw. In addition to this, you are likely to get a free card after after-check raising on the flop, because your opponent will be afraid to bet into you on future rounds. Giving you extra opportunities to make your draw.

If you hit a monster hand in poker, your main objective is to get as much money from your opponents as possible, and this is where a check-raise comes in handy. Unlike in the situation mentioned above, you want to use the check raise a little more passively to avoid scaring your opponents out of the hand. As with using this move to bluff opponents, there is another set of criteria that will make this play successful when followed correctly.

It is advisable to check raise for extra money when there is more than one opponent in the pot, otherwise the move will do what is mentioned in the first part of the article, showing too much strength and making your opponent fold his marginal hand.

In the majority of situations, you are better off betting straight out as opposed to going for the check raise. However, it is a handy play to have in your arsenal in the right spots.

It is better to attempt a check raise when you are in one of the earliest positions in the hand, because if you are one of the last few to act, then you cannot be sure that any of the players behind you will bet to give you the opportunity to raise.

Although you want to extract as much money form your opponents as possible, a large re-raise may scare them all out of the hand. By minimum raising you are giving you opponents a greater incentive to put more money into the pot, because it is not costing them as much to see the next card.

Be sure when you do check-raise to extract extra money from your opponents, that your hand is virtually unbeatable. You do not want to be making minimum re-raise if the board is coordinated enough that your opponents hold hands that could possibly out-draw you.

When used correctly, the check-raise can be used to your advantage when you do not hold a strong hand, and when you hold a very strong hand. It is well worth your time and effort learning the principles put forward in this article, as it will prove to be of a tremendous value to your poker game.

This article covers the basics that you should know to help you understand how to effectively use this move. Be careful not to over-use this move, as it will lose its credibility the more you use it against the same opponent. The check-raise also requires a certain amount of knowledge about your opponent, which cannot be thoroughly taught through articles. So get out there and practice!