The Stop And Go Play 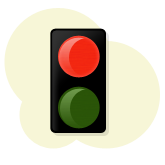 The "stop and go" play is a tournament manoeuvre that takes place over the pre-flop and flop betting rounds. The play is typically used when a player is short-stacked in a tournament and has a hand that they are willing to go all-in with in an attempt to double up.

The stop and go play situation.

In a situation where you are short-stacked in a tournament with a decent hand, the standard play is to push all-in if an opponent has raised in front of you.

However, if you are so short-stacked that your all-in push is not enough to make another decent full size bet on top of your opponent’s raise, the chances are that they are going to have the odds to call your bet and see all five community cards to try and make the best hand. Therefore in these situations where you probably do not have enough chips to force your opponent to fold with your re-raise, you may consider making a stop and go play.

The stop and go play.

Your opponent will have a tougher time calling your push on the flop than they will calling a push pre-flop.

The stop and go play reduces the odds your opponent has to call, and so they will have to think hard about whether they want to continue if they haven’t improved their hand, and 60% of the time they won’t.

Say we are in the middle of a tournament and we are short-stacked with 1200 chips. The blinds are 100/200 and we are holding A

on the big blind. Everyone folds to a player in late position who makes a standard raise to 600, and lets say that we know for a fact that they are holding a pair of Tens.

The rest of the players fold and now the action is on us. Now in this situation we could happily move all-in, but our opponent would definitely be calling our 600 re-raise and we would be facing a 50/50 all-in coin flip. Instead however, we could improve our chances of winning by making a stop and go play.

So rather than coming over the top, we call our opponents raise leaving us with 600 chips left in our stack. The flop comes Q

and we move all-in. Our opponent is now faced with a tough decision, as they now have to call 600 into a 1300 pot with middle pair.

Our opponent has roughly 2:1 odds to call, and we may well have made a pair of queens on the flop or be holding a higher pocket pair. Therefore if they fold, we take down a decent size pot with the worst hand, whereas we probably would have been out of the tournament if we had pushed all-in preflop.

Why the stop and go play works.

By putting our opponent’s to this tough decision on the flop, we are increasing our fold equity and thus improving our chances of winning the hand. Even if our opponent has improved on the flop and they decide to call, it would not make a difference if we played the hand alternately by pushing all-in preflop, as they still would have improved their hand either way.

Our fold equity increasing by pushing on the flop instead of pushing all in before the flop.

Therefore the cards that come out on the flop will have no influence on the way we play the hand, as our intention throughout the hand is to move all of our chips into the middle at some point.

A couple of tips for making the stop and go play a success.

Always move in when first to act.

If we are acting after our opponents however, we should always be prepared to call or raise any bet they make regardless of what we are holding. This is because we are more than likely going to be pot committed, and so it would be unprofitable to fold and leave ourselves with a small stack when there is still a chance that we may win the hand and a decent sized pot.

Only use the stop and go heads up.

It should be noted that the stop and go play should only be used when we are heads up against an opponent. If there is more than one player in the pot, it will increase the chances that one of our opponents will have a good hand after the flop comes down. Therefore in any situation where you are short-stacked with a hand that you are prepared to go all in with, it is better to move all-in preflop rather than call in an attempt to make a stop and go play.