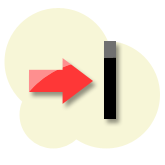 The "blocking bet" (or blocker bet) is made when you are out of position and wish to see either a showdown or a river card cheaply. If used effectively it can prevent your opponent from making a big bet that you can not profitably call.

If used incorrectly, or in the wrong circumstances, this blocking bet is simply a waste of chips. This article will show you how and when to use the blocking bet.

What is the blocking bet?

The blocking bet is simply where you make a smaller than average sized bet when first to act in order to reduce the amount of money that you pay to see the next card.

By making a small bet, you anticipate that your opponent will just call and not raise. As a result, you will not have to call what would have been a larger bet from them (in comparison to your "blocker bet") if you had checked.

The best way to understand the block bet is to look at what you are trying to achieve. The idea is that you see the next card – or a showdown – as cheaply as possible when you expect your opponent to make a large bet when you check. The last point is the most important, if instead your opponent would have checked behind then you are not betting to see a cheap card (for example) you are simply building the pot!

Let's say you limp behind another pre-flop limper with J

and face a re-raise from the button (first limper folds). The flop comes A

, giving you a flush draw. You check, and the button bets half the pot. You believe that the effective stack sizes are deep enough to give you the correct implied odds for hitting your flush, so you make the call.

Now the turn comes and the board reads A

You expect that if you check again your opponent will bet a large enough amount that you would be unable to continue with your flush draw. As an alternative you make a small bet of 1/3rd of the pot. This is designed to prevent your opponent from making too big a bet – if he calls with his (very likely) top pair then you get to see the river card for a relatively cheap price.

The advantages of the blocking bet.

There are two advantages to the blocking bet play.

1) If you make your flush on the river then you are very likely to be paid off by any player with a pair or better. The blocking bet stopped your opponent from betting an amount that you would not have been able to call – and also disguised your holding at the same time. If you miss the river then a check and fold is probably optimal here against most opponents.

2) If the positions had been reversed – you were on the button rather than the out of position player – then a blocking bet would not have been necessary here. Your opponent would have acted before you and could have bet enough that you were unable to call. If – after seeing his flop bet called – the player checked on the turn you would have been in a position to check behind to try and make your flush with a free card.

Blocking bets can also be used when all the cards are out. The river blocking bet is for situations where your opponent is a habitual bluffer – that is to say that a big river bet could either be a monster hand or a complete bluff. If you have a medium strength hand such as top pair with a reasonable kicker then a blocking bet can sometimes allow you to get to showdown cheaply.

The idea is to bet an amount that is large enough to prevent your opponent from bluffing, yet small enough so that those times your opponent does have a very strong holding and comes over the top you can fold only having lost a few chips. Whether to block on the river will depend on your assessment of the particular opponent, if capable of a big river bluff then a blocking bet can be a very effective weapon.

A common mistake when using the blocking bet.

The biggest single mistake players make with blocking bets in Texas Holdem is to only bet a small amount when they are attempting to block. If observant opponents realize what your smaller bets mean then you will simply not be able to make this move against them. The reason is that the blocking bet can be countered easily with a raise, either as a bluff or a semi bluff. The very nature of this move means that you will be making it with hands which can not call a big bet.

Bet a sensible amount when making a blocking bet, otherwise your opponent will be more than happy to raise and make it very difficult (and unprofitable) for you to play on.

A solution to this is to ensure that you mix in value bets where you do have a very strong holding a good proportion of the time. If those same opponents are unable to tell whether your smaller bets are blocking bets or for value then their best response becomes unclear. You have then forced them into a position where they may make a mistake – resulting in profit for you.

To summarize, the blocking bet is made when out of position against an opponent who will most probably bet if you check. It is made with hands which do not want to call a big bet – such as draws during play and medium strength hands on the river.

Betting a small amount will often confuse your opponent into calling instead of raising, allowing you to see the next card (or showdown) relatively cheaply. Ensure you mix up your blocking bets with value raises – once opponents get a read on your blocking bets they completely lose their effectiveness.