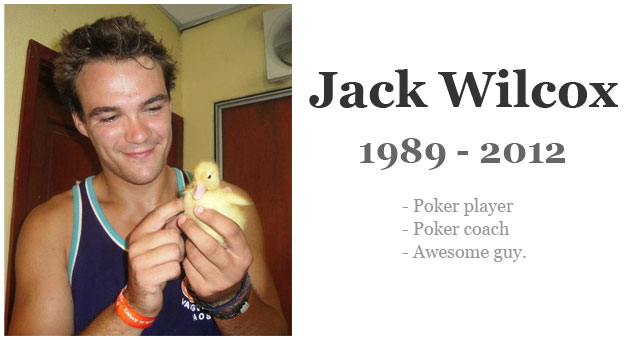 Jack Wilcox was a professional poker player from Reading, UK. He was a successful $400NL and $600NL 6max NLHE player. He took shots at $1,000NL (mostly when the fish were around), as well as occasionally playing PLO.

Jack moved to Thailand with a group of other online poker players to for an extended holiday in early 2012. He died in a motorcycle accident on the 6th of February 2012, less than 3 weeks after arriving. He was 22 years old.

However, since he started playing poker in 2009, Jack has helped a lot of people to become better at poker. He was active on the 2+2 forums, and also spent time chatting with and coaching players via instant messenger. He started his own training site aimed at micro-stakes players, and created multiple strategy articles and training videos to help beginners.

This page is here as a resource for links to all of his selflessly helpful work. We'll never know what great work he would have gone on to create, so we'll just have to settle for the amazing stuff he did leave us with.

Even though Jack is no longer with us, his work will continue to make a difference. His talent for teaching deserves to be benefited from for years to come, so here you go.

In 2011 Jack started work on Higher Level Poker — a training site for small/micro stakes players. In the year before he died he created 30 videos and 15 articles for the site, in addition to building a lively forum and attracting other micro stakes coaches to contribute.

The site was promising, and I can only imagine how successful it would have been had it continued on its path. Here are some screenshots of what it looked like: 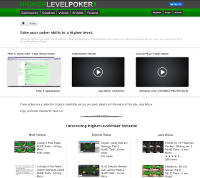 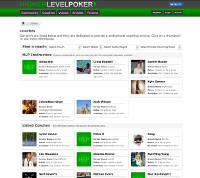 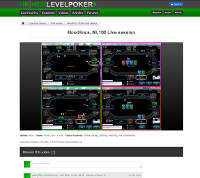 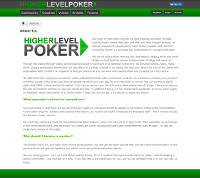 Work on the website stopped when Jack died in February 2012, and I stopped hosting the site (as it was) in August 2020. However, all of the videos and articles from the original site can be found below.

This is a selection of the best training videos from Higher Level Poker. It includes all of Jack’s, and some of the better videos from other coaches.

These are direct links to the video files. They should play in your browser, or you can Right Click > Save As.

This is a complete list of the videos posted on Higher Level Poker in chronological order:

Here's links to Jack's work that I've been able to find on the Internet.

Jack was also a coach at the pokervip.com website for a short while. They used to have a paid-subscription section that his videos were behind, but they are now freely available on YouTube.

Is Jack's strategy and advice any good?

I guess it worked:

And you know how some people are good at explaining stuff? That's Jack as well. 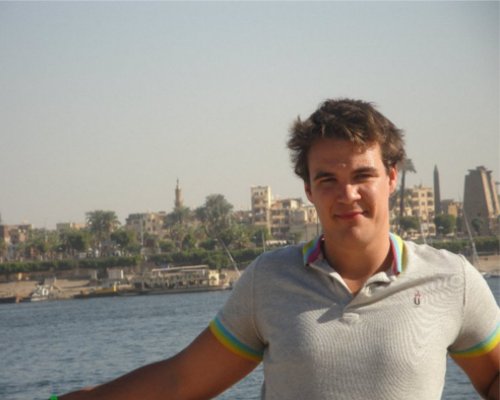 I'm Greg, the guy behind this site.

I was genuinely fortunate enough to know Jack in person. That's a cliché, but I don't care. It's true.

It annoys me that everyone speaks so highly of people when they pass away, because it it takes weight away from what I'm going to say about Jack. Jack was awesome, and it's not his death that makes him that way.

How I knew Jack.

We weren't bestest buddies or anything. We just did some work together, lived nearby, and chatted every time we saw each other. But that was enough. That was enough to know the kind of man Jack was.

It was always enjoyable to bump in to him – you never had to think of anything to say because he had that covered for you. He always had something interesting for both of us to talk about. As hard as I may have tried, I couldn't have an awkward conversation with him.

I regret not getting to know him more than I did, because he would have made a damn good friend. I missed out there.

I heard he was the president of the poker society, but I just assumed he was just an average live player with limited skill. Didn't take long to do a quick browse around his posts at 2+2 to learn that he was actually much better than I was/am. So impressive in fact I felt a little inferior. His grammar in forum posts is atrocious though, so that made me feel a bit better. Still, he always knew what he was talking about when it came to strategy.

Anyway, where I had dropped out after just 1 year, Jack went on to juggle both online poker and University, earning a 2:2 Bsc Business Management in 2010. My girlfriend was graduating at the same time as him, so it was cool to be there to see him pick up his degree.

That's about as much as I know. Again, I didn't know him amazingly well, but I knew him well enough to know all that. I'm an excellent judge of character, and I could judge that Jack's character was excellent.

The more I think about Jack the more I realise what a loss to the human race he is. He had selfless ideas and goals, and it hurts to think about what we'll be missing out on. The last big plan of his that I remember involved setting up a hostel for young people travelling to Swansea.

I noticed he started dabbling in making poker training videos for the 2+2 community in mid 2009 (in his NL 10 - NL 200 Experiment thread), so I took advantage of this by asking if he'd like to make some training videos for ThePokerBank. Being Jack and loving the idea to help even more people, he obliged.

He asked for so little in return for videos he was essentially making them for free. It must have worked out to less than minimum wage. As I keep saying, Jack really just loved to teach, and he loved to help.

Jack's First Video: I can't find a copy of the first video Jack made for 2+2. Here's the post on 2+2 about it, but it was uploaded to MegaUpload so I can't re-download it. If you've got it, can you let me know at greg [at] thepokerbank.com? That would be amazing to find.

Jack Wilcox 1 was the first video he made for this site. I was happy that he charged so little, as the audio wasn't great (just technical teething problems) and needing some fixing. But as expected, the content was (and always will be) typical Jack Wilcox quality. Easy to follow and easy to learn from. He was a natural teacher.

I wish I could have squeezed more videos and articles out of him, but he had plans of his own.

I've not written anything like this before, so I'm not sure how this part goes. I think I'm supposed to finish with a lingering sad thought or memory.

Whatever. I can do better than that. Instead, click this link (not yet, in a sec).

That link will take you back to the top of this page, back to Jack's anthology. Watch, listen to and read all the great advice, and use it to become a better poker player. That's why Jack made it all, and that's what it will do if you take his advice onboard.

Thanks for the tips Jack!

Another insight in to how cool Jack was.

It's easy to find kind words about someone when they're no longer with us. For Jack, however, this makes no difference. Here are a few things posted about him on his PokerTableRatings.com player profile before he passed away:

If you're not familiar with the world of online poker, you won't grasp the gravity of these 5 simple comments. Poker involves trying to win money from other people, and understandably not everyone enjoys being on the losing end of this process. As a result, abusive comments about other players are standard.

It's kinda like trying to make friends in the comments section of a video about religion on YouTube.

So to see such comments like Came to my table, asked to 3-4 table and when I wasn't up to it, replied very polite. Seems solid isn't just a pleasant surprise, it's incredible.

And no, no comments have been removed or edited since his death to make the page look better. I know this because I checked up on Jack's stats myself from time to time, and nothing has altered.

On the 6th February 2012, Jack Wilcox tragically died in a motorbike accident in Phuket, Thailand where he had been living for the past month in a poker fraternity.

Jack Wilcox was a co-founder of Higher Level Poker – his idea and passion was to help others improve their poker skills. He contacted me in 2010 to build a website that would become the "Facebook of poker", aimed at small to mid stakes poker players. For many of us who knew him, you could clearly see this was his goal.

He put many hours of his time into this website at the expense of actually playing poker, and at the time of his passing, he was working on an eBook packed with strategy and tips to help our members improve. You can see the effort he put into this website by the number of videos he has produced. And all of this effort came from his desire to offer his value to the world.

Jack was well respected among the online poker community. The poker thread on the 2+2 forums (https://forumserver.twoplustwo.com/39/small-stakes-pl-nl/jack-wilcox-1163278/) has over 15 pages of tribute messages for Jack. Some quotes from various people:

Chatted a lot of strategy on Skype with him, great guy :'(

He was a really nice guy and really friendly, RIP such a shame.

We only began speaking recently but you were a great guy and left a profound impact in our lives. Thank you.

I once had the pleasure of sitting next to Jack in a live game when he was just finishing up university and he told me all about his hopes, fears and thoughts of 'going pro'. I spoke to him for a couple of hours and he's definitely the most genuine and likeable guy I've ever met (and am likely to ever meet) at a poker table.

He was a fantastic guy and nothing was ever too much trouble.

We need more people like Jack to set as good of an example as he did.

I only talked to him on Skype (quite a bit) but Jack was one of the nicest guys I met through poker.

Guys like this are hard to come by, that's for sure.

Jack was a great guy and quite instrumental in helping me get my business started in this industry.

I used to talk to Jack all the time on Skype about just about anything from poker to life. He always struck me as a kind hearted individual with no ill intentions towards anyone.

Jack was an inspiration to me and many others in the community, that with hard work and passion you can achieve whatever you set out to do in life.

Jack was a truly awesome, genuine, kind, loving person. His energy and charisma filled the room. I had the pleasure of working with Jack and more importantly being his friend. The times I shared with him were good ones. He was possibly the nicest person I ever met.

The videos and his work will remain on this site indefinitely. However I would like to stress that no more content will be added, this website will remain as a tribute to Jack.

You will be greatly missed.

Want to add something here? greg [at] thepokerbank.com

Have I missed anything? Send me an email at greg [at] thepokerbank.com and I'll add it to this page.