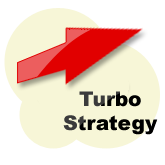 As you can guess, these turbo Sit and Go tournaments do not last for long, and so they attract the players who are looking for some fast entertainment at the poker tables.

Now, these particular tournaments with their unique (and pretty speedy) blind structures can be tricky to play, and so require a certain strategy that is quite different to your standard Sit and Go tournament strategy.

The turbo poker tournaments are not impossible to beat, but the fact that the pace is so fast means that they require a little more luck than your standard SnG tournament. This is because you are essentially playing short stack poker a lot of the time in these games, which means that a lot of your plays are going to be reduced to all-in or fold decisions.

There is very little room for post flop play in these games, and after the first few rounds you will not be playing much poker after the flop, as you are likely to be all in by this point. So in a nutshell, good turbo poker tournament strategy is going to involve good starting hand selection and picking the right spots to move in. It can be pretty frustrating having the risk all your chips so frequently, but it's the way these games are played and how to play them successfully.

There is no doubt that you are going to experience a lot of variance in these games, so don't expect to see results after a handful of tournaments. You really need to play a large amount of these games to be able to consistently win money, so get used to some pretty big swings if you decide that you want to regularly play in turbo tournaments.

You will need to play a larger number of turbo tournaments before you start to see honest results.

The early stage of these turbo tournaments is going to be your only opportunity to play 'proper poker', as the blinds are going to be small in relation to the size of the stacks. This will only last for 2 or 3 levels depending on how quickly the blinds move, but up until the big blind becomes around 1/10th the size of your starting stack, you can be prepared to play hands without having to resort to drastic moves.

However, at the early stages of these tournaments, I'm not going to look to try and steal blinds or pick up small pots, as they are going to have very little effect on the outcome of the tournament. If I've got a strong hand I'm going to raise a big amount and hope to catch someone over playing a weak ace and try and force them to put as much in the middle as possible, but this is no time to try and pick up small pots with fancy plays.

The fact that these tournaments run so quickly means that the players at the table will already be in a gambling frame of mind, and will be willing to risk a lot or all of their stack even when the blinds are so small. Therefore whenever I am dealt a hand, I am always going to consider whether or not it is one that I would back up with my whole stack. If not, then the chances are that I am going to fold.

As with any stage of turbo tournaments, starting hand selection is going to play a huge role in the middle stages of a tournament. If the general stack size means that players have between 7 and 12 big blinds, you are in the middle stage of the game. This will allow for a two raises before one player is going to be all-in, so there really is not much room to move around.

In general, if I am entering a pot, then I am entering with the intention of playing for my entire stack. If I am becoming low on chips, the blinds are likely to be valuable enough to pick up, so a solid all-in push from late position may well be a good plan of action from time to time. Other than this however, I am going to stick to playing with premium hands, but widening my starting range up in late position.

At this stage, you can effectively start to use the stop and go play. This will help increase your chances of winning a hand if you are prepared to push your entire stack in the middle, but don't feel that it will push your opponent off the hand. It may be a good idea to call a raise and push it in on the flop, as a small all-in reraise preflop will often give your opponent the right odds to call.

When you have 6 big blinds or less, you are going to be in all-in or fold mode. It is likely that there are very few players left in the game, and so you should be happy to push with a much wider range or starting hands.

Don't be too afraid to stick it all in the middle because of the bubble, as you will be able to take advantage of the players who are going fold a number of good hands just so that they can try and sneak there way in to the money.

Play to win the tournament by taking 1st place, rather than playing it overly safe and trying to make it into the money.

If you can show no fear of being bubbled, you will be able to pick up a large number of pots and set yourself up to be in a good position to win the tournament. There will be times when you just miss out on the money because of being so aggressive, but there will also be times where you win enough to take the tournament down, so show no fear.

For help with those tough all-in decisions, try learning how to use the independent chip model.

If you can get passed the fear and frustration of constantly risking your stack, you will be able to make optimum plays and get the better of the luck-heavy turbo poker tournaments.