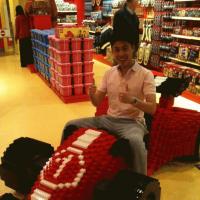 This is a guest post by Johnathan "thatssosick" Chan. He was a coach at Jack Wilcox's old HigherLevelPoker.com training site. I decided to transfer Jack's articles to this website in August 2020, and thought I'd include the articles by other coaches whilst I was at it.

Bet sizing is one of the most underrated aspects of poker. It is essential to size your bets appropriately base on what you are trying to achieve.

When I coach my students, we commonly come across spots where they have not put much thought in to their bet sizing. Many players just default to betting a certain percentage of the pot without analyzing it properly.

In this article I will run through two example hands, and explain how they could have won significantly more money by making seemingly minor adjustments to their bet sizing.

The following example was taken from a student that I coached.

We are playing 100NL. The villain is a passive fish who displays stats of 30/5 (VPIP/PFR).

It does not make sense to cbet a sizing of 6.5bb in this spot, as it their continuing range on the flop is inelastic.

An inelastic range is a range that is insensitive to the bet sizing you make.

On this flop, this type of player is continuing a range of (Ax,9x,TT-KK), and is folding everything else. With that range, they are not sensitive to your bet size. So if you bet 9bb or 5bb, they will still continue either way. You can say its unlikely they continue with TT-KK if you bet something ridiculous like 50bb, but it does not make much sense to cbet that amount, so we can disregard that.

So in a spot where they are continuing an inelastic range (and we don’t have a legitimate hand), we should be betting on the smaller side. A bet of 5bb, 4.5bb, or even 4bb works fine here against this type of player.

That was a simple spot. Lets look at a slightly more complicated one.

My student is still playing 100NL. Villain is an unknown, but seems to be a straightforward 20/18 with a 6% 3bet. We have only played 100 hands together, so we don’t have any history.

Good result for my student — she wins an 87bb pot. But once we flop a set, our first thought should be thinking about how to get as much money into the pot as possible.

Against a villain who has not seen us play much, cbetting 4bb is a leak, because it's a flop where their continuing range is inelastic once again. They will be continuing a range of 88-JJ, Kx, flush draws, 22, 7x, and maybe 33-66. Besides the 33-66 range, they will be calling with the rest of their range to any bet between 1bb and 7bb (the size of the pot).

Betting full pot would make us look extremely strong, so I would advise to bet 5.5bb instead. You might be thinking it's only 1.5bb more, but you have to remember pot sizes grow exponentially.

This means we can bet 15bb on the turn, rather than 10bb. Their range for continuing on the turn is Kx and some flush draws, and once again it is inelastic. They will be folding hands like 88 whether you bet 10bb or 15bb.

The Q comes on the river. Their range is Kx, some KT, KQ, and missed draws. The missed draws are not calling no matter what. It's also very likely KQ is calling no matter what, and KT and Kx calls some percentage of the time. Looking at this range, you should be looking to bet big, as most of their range is calling a bigger bet more often than not.

A bet size of 40bb is appropriate. The flush draw missed, and it's plausible that villain will look at the missed draws and big bet size and try bluffcatching with Kx.

Villain calls with two-pair and the pot is 128bb.

Bet sizing is not as simple as betting big when you have a good hand and smaller when you don’t.

With these examples I wanted to illustrate the importance of thinking about your bet sizing, how much it can affect your play, and at the end of the day, your winrate.

About The Author: Johnathan "thatssosick" Chan

My name is Johnathan Chan (Johnny Chan) and I am a semi-professional poker player. I am a British-born Chinese but have roots and family from Hong Kong having spent 12 years there. I currently have a full-time job as a Financial Services Associate for Standard and Poor’s (not in ratings so please skip the credit crunch abuse thanks).

My poker ‘career’ started in my university playing SnGs with friends. We would buy in for £1 and play for hours. High roller events would be £5 buy ins. I started off really loose and aggressive, already raise betting like mental and trying to make people fold their hands.

So I experienced good success playing live and deposited at a couple of sites and managed to make a little money on the side playing on PKR (it was the fishiest site ever, me included). I only started taking online poker a little bit more seriously in my final year December 2008 where I deposited 40 dollars and played 0.01/0.02c. Within a 2 month period I had already gone through 2NL, 5NL, 10NL, 25NL, 50NL and was playing 100NL February 2009. Of course I ran good and moved up quick so when I tried to shot 200NL, I was battered badly. Started my fulltime job June 2009 and kind of hung around 50NL which was my bread and butter.

I decided to give up poker and withdrew the remaining 1k on Stars. For some reason I decided to leave the 75 dollars on FTP just to play $5 HU SnGs for fun. Ran it up to 125 dollars crushing HU SnGs. Was tired of that, degens gonna degen so went to play 50NL HU. I will never forget the hand where I called an all in shove for my whole roll with A high on the river and was good. Stuck to 50NL HU, ran it up to 500, and decided to move back to 6max. I moved straight into 50NL and by mid 2010 was back to playing 100NL after hitting 8k bankroll.

Moved up to 200NL as a breakeven player towards end of 2010 and studied a lot during the Christmas break of 2010. This meant posting very actively on online forums and questioning every decision I made in every hand. Started 2011 with a completely new mindset and have been a winning poker player since.

But it isn't always 41bb, right? There will be times when villain will be on a flush draw, and a flush draw will hit and we will lose our hand. In this scenario we will lose more, but this is still the right way to play, I just want to point that out :)

Thanks for this. I played a short FR 25NL session after having an afternoon nap, and knowing that I was still recovering from that fog, I played super tight even though I had the best hand on at least 4 occasions. Reviewing my play later in HEM, I was able to count up having "lost" at least $15 by being too tight in my street bet sizing. It does add up.

Goran - I'm happy if opponent has a flush draw and they end up hitting, which means we would lose a bigger pot. The aim in poker is getting our opponents to put in the most money when behind, so by betting bigger, although we lose more, we have made profit in the long run by their bad call.